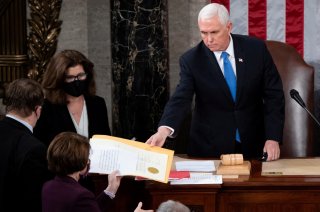 It appears that most Americans believe that it is a good idea that Congress is pushing for the modernization of the 135-year-old Electoral Count Act, which former President Donald Trump and his allies exploited in an effort to overturn his 2020 election loss, according to a new Politico/Morning Consult poll.

That antiquated nineteenth-century law became a major focus of Trump’s scheme to remain in the White House, as he pressured Republican lawmakers and then-Vice President Mike Pence to reject votes for Joe Biden from certain states during the joint session of Congress on January 6, 2021.

According to the poll’s results, 52 percent of respondents say that it should be more difficult for Congress to override presidential election results, and 53 percent say that it should be harder for state governments to do so. Among only Republican voters, 41 percent say they support making it harder for state governments to override results, and 42 percent support it when it comes to Congress.

After months of negotiation with a group of sixteen senators, Sen. Susan Collins (R-ME) and Sen. Joe Manchin (D-WV) introduced legislation in late July that aims to reform the Electoral Count Act.

The bill would enshrine the vice president’s “ministerial” role rendering that individual powerless to alter the electoral count, raise the number of congressional objectors required to challenge a state’s results to 20 percent, or one-fifth of members, in both chambers, and dictate what would occur if an alternate slate of electors is presented to Congress. Additionally, the legislation seeks to stop any state from sending a false slate of electors, which was part of a plan by Trump’s allies in 2020.

Currently, just one House member and one Senate member can force a vote on objecting to the election results during the certification process.

Politico reported that after Senate Minority Leader Mitch McConnell (R-KY) earlier this week announced his support for the measure, the Senate is widely expected to pass its version of the bill. The measure already had garnered enough Republican co-sponsors to overcome a filibuster.

“I strongly support the Collins legislation as introduced, and assuming that we make no changes here today, or at the most technical changes, I’ll be proud to vote for it and to help advance it,” he said in a floor speech prior to the Rules Committee markup of the bill.