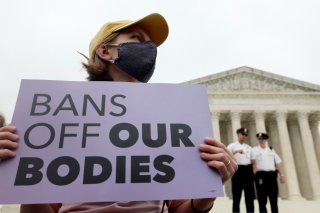 Roughly a month after the Supreme Court’s controversial decision to overturn Roe v. Wade, the 1973 landmark decision that established the constitutional right to abortion, a new poll is indicating that 60 percent of Americans want Congress to pass a law guaranteeing access to legal abortion nationwide.

The poll of more than a thousand adults conducted by the Associated Press/NORC Center for Public Affairs Research further revealed that 53 percent of respondents say they disapprove of the court’s decision, while 30 percent say they approve. An additional 16 percent say they neither approve nor disapprove.

“Overwhelming majorities also think their state should generally allow abortion in specific cases, including if the health of the pregnant person is endangered or if the pregnancy is the result of rape or incest,” the Associated Press writes.

“Few think abortion should always be illegal, and most Americans support their state generally allowing abortion six weeks into the pregnancy,” it continues.

Last Thursday, the House of Representatives passed legislation that aims to protect the right to purchase and use contraception without government restrictions. The bill, called The Right to Contraception Act, is almost certain to fail in the evenly divided Senate, where most Republicans are also likely to be opposed.

The Biden administration has also warned pharmacists that they are at risk of violating federal civil rights laws if they decide not to fill prescriptions that could be used for abortions. The U.S. Department of Health and Human Services’ Office for Civil Rights issued the guidance to about 60,000 retail pharmacies across the country.

Furthermore, the White House told hospitals that they “must” provide abortion services if the life of the mother is at risk, contending that federal law on emergency treatment guidelines preempts state laws in jurisdictions that now prohibit the procedure without any exceptions.