Popular Where It Counts: Support for Manchin Surges in West Virginia 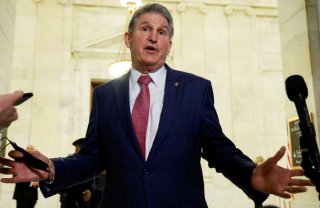 Although he is largely seen as the lawmaker who put an end to the monthly payments from the popular enhanced child tax credit, Sen. Joe Manchin (D-WV) is enjoying soaring approval ratings in his home state of West Virginia, a Morning Consult poll has revealed.

In fact, the conservative-leaning Democrat’s approval rating has climbed more than any other senator since President Joe Biden took office in January 2020. As reported by USA Today, the poll showed that 57 percent of voters approve of Manchin, compared to 40 percent in the first quarter of 2021.

“The amount of interactions he has with his voters I don’t think can be paralleled by other members,” he continued.

Not surprisingly, Manchin’s rising popularity is largely being propelled by Republican voters.

“Sixty-nine percent now approve of his job performance, doubling his rating from the first quarter of last year, when 35 percent approved. Most of that improvement has come since the third quarter of 2021—before he killed the Democrats’ Build Back Better domestic policy legislation,” Morning Consult wrote.

“While Manchin has made up ground on the right, he’s angered West Virginia Democrats, 54 percent of whom now disapprove of him, up from 32 percent around this time last year. However, he’s also made large gains with independents over that time frame, with an approval rating rising from 31 percent to 50 percent,” it added.

Last December, due to his refusal to support the Build Back Better legislation, Manchin single-handedly brought down the possibility of extending the enhanced child tax credit for another year. He contended that doing so would only discourage people from working and that any additional federal spending would further exacerbate inflationary pressures.

During an event in Washington state late last week, Biden appeared to take a swipe at Manchin for his part in ending the enhanced credits.

“We lack one Democrat and 50 Republicans from keeping it from passing this time around,” the president said. “But it really fundamentally changed the lives of millions of people.”

In the latter six months of last year, the American Rescue Plan-approved measure provided eligible parents as much as $3,600 for a child under the age of six and up to $3,000 for children between the ages of six and seventeen. This amounted to a $250 or a $300 payment for each child that was sent out to parents each month.

Without the passage of Build Back Better, the maximum child tax credit has plummeted by $1,000 per school-aged child and $1,600 per child under six. Millions of the nation’s lowest-income families are now ineligible for the credits.