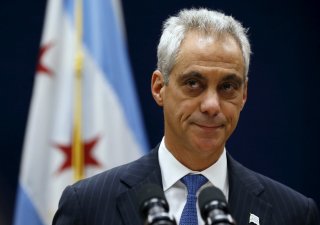 Rahm Emanuel, the former Chief of Staff to President Barack Obama who served as mayor of Chicago from 2011 until 2019, received the approval of the Senate Foreign Relations Committee on Wednesday, advancing his nomination as Ambassador to Japan to the full Senate chamber for a vote.

However, within the committee, two progressive Democrats voted against Emanuel’s confirmation, leading to fears that the party’s progressive wing could oppose him in a floor vote.

Senators Jeff Merkley (D-OR) and Edward Markey (D-MA), two left-leaning legislators, asked that they be put down as ‘no’ votes specifically on the former mayor’s confirmation, as the committee voted to approve fourteen separate ambassador nominations at the same time.

Emanuel has been the target of criticism from progressives over the circumstances surrounding the murder of Laquan McDonald, a black seventeen-year-old who was shot and killed by a Chicago police officer. Although the official report of the incident claimed that McDonald was carrying a knife, subsequent body camera footage revealed that he was not, and had been walking away from the officer at the time of the shooting. The officer was later convicted of second-degree murder.

However, the city of Chicago delayed releasing the body camera footage for a year, during which time Emanuel was re-elected, leading to accusations that he had intentionally covered up the incident to avoid a scandal.

“Black Lives Matter,” Merkley said in a statement explaining his vote against Emanuel. “Here in the halls of Congress, it is important that we not just speak and believe these words, but put them into action in the decisions we make.”

Progressive legislators and activists, including Rep. Alexandria Ocasio-Cortez (D-NY), praised the two senators for their dissent.

“This was the courageous and right thing to do,” Ocasio-Cortez tweeted after the vote.

It is unclear if progressive opposition will sink Emanuel’s confirmation, as at least five Republicans, including Lindsey Graham (R-SC) and Susan Collins (R-ME), have come out in support of him. Moreover, President Joe Biden and Senate Majority Leader Chuck Schumer (D-NY) have continued to support Emanuel, and high-profile senators associated with the party’s progressive wing, including Sens. Bernie Sanders (I-VT) and Elizabeth Warren (D-MA), have not yet announced how they will vote.

Emanuel’s confirmation vote has yet to be scheduled, as some members of the opposition, notably Sen. Ted Cruz (R-TX), have delayed ambassadorial votes in retaliation for the Biden administration’s decision to cease its opposition to the Nord Stream 2 pipeline from Russia to Germany, which critics have alleged would make Europe dependent on Russian energy.