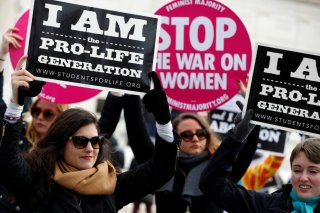 O’Dea, who will now challenge Democratic Michael Bennet in November, gives his party a relatively moderate candidate supportive of some abortion rights in the wake of the Supreme Court’s controversial decision to overturn Roe v. Wade, the 1973 landmark decision that established the constitutional right to an abortion.

Abortion is legal in the state of Colorado, under a Democratic bill that was passed earlier this year.

According to Roll Call, “O’Dea’s nomination is almost certain to raise national interest in the Colorado Senate race. If elected, he would join only a handful of Republicans in Congress who have deviated from their party’s push to outlaw abortions under almost any circumstances at a crucial moment in the nation’s battle over reproductive rights.”

O’Dea has stated on the record that abortion should only be allowed early in pregnancy, though he has refused to say when he would impose a cutoff. He also supports exceptions in cases of rape, incest, and certain health circumstances.

“It’s not coming from [U.S. Senate Majority Leader Chuck] Schumer and this leftist progressive cabal that does not believe life begins at conception,” he continued.

In order to deny the GOP nomination to O’Dea, who is seen as a far stronger candidate, Democrats spent more than $4 million to boost the Senate campaign of Hanks.

“It's a very inviting target, to go after a Republican candidate whose position is no exceptions,” Dick Wadhams, a former chairman of the Colorado GOP who has worked for anti-abortion candidates in the past, told the Associated Press. “I do think the repeal of Roe v Wade may embolden more candidates to go in that direction.”

NBC News reported that “O’Dea ran as a more mainstream Republican, emphasizing issues like jobs, inflation and the national debt on his campaign website.”

However, Hanks, who also spoke about such issues, “is known in Colorado’s Legislature for his focus on election issues that perpetuate former President Donald Trump’s lies and debunked claims that a second term was stolen from him in 2020.”

Hanks has admitted participating in a January 6 rally that preceded the attack on the Capitol aimed at disrupting the certification of President Joe Biden’s victory over Trump.

Meanwhile, O’Dea has accepted the results of the presidential election. “Look, I’ve been consistent with my message,” he recently told Colorado Public Radio.

“Biden’s our president; he’s a lousy president. … I’m not looking backwards at what happened. What’s important to working Americans here in Colorado, and across the country, is looking forward. It’s making sure we get control on this inflation. It’s reducing the price of gas,” he added.