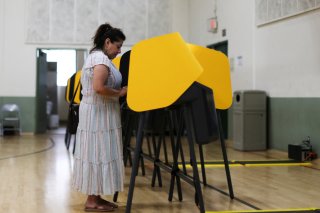 Results from the San Francisco Department of Elections showed the recall measure, also known as Proposition H, had the support of roughly 60 percent of voters, with just 40 percent voting against it. San Francisco mayor London Breed will choose Boudin’s replacement after the results are certified by the elections office and approved by the Board of Supervisors.

The forty-one-year-old Boudin, who will depart the office after serving two and a half years of his four-year term, was a first-time political candidate who narrowly won office in November 2019. The longtime public defender sought to reform the criminal justice system, including by ending the use of cash bail, stopping the prosecution of minors as adults, and focusing on lowering prison populations amid the ongoing pandemic.

But proponents of the recall—who spent more than $7 million throughout the course of the campaign—claimed that Boudin’s progressive policies were too lenient on crime and put the safety of residents at risk. The recall momentum continued to gain steam throughout 2021 as hate crimes against Asian Americans in San Francisco spiked dramatically.

Per SFGATE, Boudin told reporters Tuesday night that he was recalled because of general frustrations about the city’s crime levels and economic hardship brought on by the pandemic.

“People are angry, they're frustrated, and I want to be very clear about what happened tonight: The right-wing billionaires outspent us three to one, they exploited an environment in which people are appropriately upset, and they created an electoral dynamic where we were literally shadowboxing,” he said.

As reported by the San Francisco Chronicle, recall campaign chair Mary Jung said that she started the effort fourteen months ago because she believed San Francisco would support a “Democratic-led campaign for a safer San Francisco.”

“San Franciscans from every neighborhood and background sent a clear message today,” she said. “Voters said loud and clear that they want a district attorney who prioritizes public safety for every community.”

Per CBS News, the recall in San Francisco could have major implications for other progressive, reform-minded prosecutors in the state and elsewhere. For example, in Los Angeles, organizers are close to garnering enough signatures to force a recall vote for District Attorney George Gascon, who was elected in 2020 and previously served as San Francisco’s district attorney.