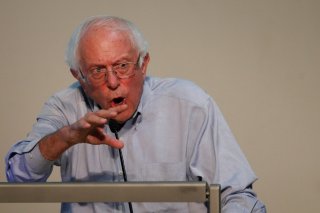 “I think [the Fed is] hurting the situation. It is wrong to be saying that the way we’re going to deal with inflation is by lowering wages and increasing unemployment. That’s not what we should be doing,” Sanders said in an interview on NBC News’ Meet the Press.

“This inflation thing is a real issue. It is a global issue. But at a time when working families are struggling and the people on top are doing phenomenally well … you don’t go after working people,” he continued.

Sanders also rejected the idea that the American Rescue Plan contributed to inflation levels reaching a four-decade high, noting that many countries around the world are struggling with their respective economies.

“Inflation globally is caused by the pandemic and the break in supply chains,” he said. “It is caused by, in my view, the war in Ukraine, obviously, and it is also caused by incredible corporate greed.”

Sanders’ remarks come as the Labor Department announced late last week that the consumer price index (CPI) was found to have risen 0.4 percent for September and 8.2 percent on an annual basis, as climbing food and rent costs again offset moderating gas prices. Core inflation, which excludes volatile food and energy items, was up 6.6 percent compared to a year ago, the largest annual gain since August 1982.

The new CPI figures are suggesting that more aggressive interest rate hikes are likely going forward from the Fed. Last month, the central bank signed off on a third straight seventy-five-basis-point interest rate hike and indicated that it will keep raising rates well above the current level. With the move, the central bank took its federal funds rate up to a range of 3 percent to 3.25 percent, the highest level since the global financial crisis in 2008. The Fed’s median estimate shows that rates are expected to hit 4.6 percent next year.

Meanwhile, according to the Wall Street Journal’s latest survey of sixty-six economists, the odds of a recession within the next twelve months is sitting at 63 percent, up from 49 percent in July’s poll. It is the first time the survey pegged the probability above 50 percent since July 2020.