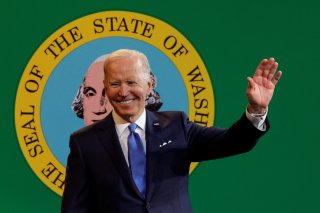 It appears that student loan borrowers won’t have to settle for President Joe Biden’s campaign promise of wiping out $10,000—as Senate Majority Leader Chuck Schumer (D-NY) confirmed on Wednesday that the president is inching closer to canceling up to $50,000 via executive action.

“I’ll keep urging the president to take this important step. And I say to my colleagues, I think the president is moving in our direction,” Schumer said on the Senate floor, per Fox Business. “My talks with him and his staff have been very fruitful over the last little while and I am hopeful that he will do the right thing. We’re getting closer,” he continued.

Schumer’s statements come as Biden, earlier this week in a meeting with members of the Congressional Hispanic Caucus (CHC), expressed his openness to eventually cancel some debt for college students regardless of whether they attended a public or private institution. “The president has been considering and looking at options for how to provide more relief to students across the country,” White House press secretary Jen Psaki said on Tuesday.

Such a move could directly affect more than 43 million borrowers who hold $1.75 trillion in federal student loan debt, according to the Department of Education. Approximately a quarter of student loan borrowers—or 10 million individuals—are estimated to be in delinquency or default.

Meanwhile, Republicans have been united on pushing back against an across-the-board student debt forgiveness. As reported by Insider, on Wednesday, a group of Republican senators introduced the Stop Reckless Student Loans Action Act—legislation that would end the Biden administration’s pause on student loan payments and prohibit it from broadly canceling student loan debt.

“As Americans continue to return to the workforce more than two years since the pandemic began, it is time for borrowers to resume repayment of student debt obligations,” Sen. John Thune (R-SD) said in a statement. “Taxpayers and working families should not be responsible for continuing to bear the costs associated with this suspension of repayment. This common-sense legislation would protect taxpayers and prevent President Biden from suspending federal student loan repayments in perpetuity,” he continued.

Sen. Mike Braun (R-IN) pointed out in a statement that “the majority of Americans do not have college degrees.” So, “why should they be forced to pick up the tab for college degrees in the name of pandemic relief? This transfer of wealth is not a move to ‘advance equity,’ but rather a taxpayer handout to appease far-left activists,” he concluded.

Since taking office, the Biden administration has so far canceled more than $17 billion in student loan debt for about 725,000 borrowers. A majority of Americans want Biden to prioritize student loan forgiveness, with Millennials and Gen Z-ers being the most vocal.