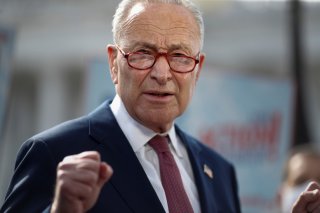 The Senate’s parliamentarian has ruled that the Democrats’ pending $3.5 trillion infrastructure bill cannot include provisions designed to provide a pathway to citizenship for undocumented immigrants and still be considered for reconciliation.

The Senate parliamentarian, a nonpartisan office currently held by Elizabeth MacDonough, is an interpreter of the Senate’s detailed and sometimes byzantine procedural rules, deciding which actions the legislative body is allowed to perform in each term. MacDonough earlier made news after she decreed that Majority Leader Chuck Schumer (D-NY) was allowed to pass one additional reconciliation bill during the current Senate session. Bills passed through reconciliation cannot be filibustered, meaning that the Democrats’ razor-thin majority will be enough to pass it. For most other bills, however, Schumer would be required to find ten Republican senators willing to side with the Democrats—a virtual impossibility, given the hyper-partisan climate on Capitol Hill.

Therefore, MacDonough’s earlier decision benefited the Democrats, who have little chance of overcoming Republican opposition for most other partisan legislation. The current reconciliation bill contains many spending priorities that Republicans refused to allow in the earlier $1 billion bipartisan spending bill. However, MacDonough’s ruling that immigration reform must be left out of the bill represents a major blow to the Biden administration and its allies in the House and Senate, who will now most likely be unable to pass any such legislation due to Republican opposition and the threat of the filibuster.

MacDonough noted in a three-page memo detailing her rationale for the decision that immigration provisions are not allowed in an explicitly infrastructure-focused bill if their financial impact on the budget is “incidental” compared to their legal impact.

MacDonough, a former immigration attorney prior to her appointment as parliamentarian in 2012, described the Democrats’ proposed language as “a broad, new immigration policy”—noting its inclusion of pathways to citizenship for “Dreamers,” or immigrants brought illegally into the country at a young age. The proposal would also formalize the status of immigrants with “Temporary Protected Status,” or refugees from other countries fleeing a credible risk of violence.

The Congressional Budget Office has estimated that up to eight million undocumented immigrants would be affected by the changes, out of around eleven million total. Around forty million people in the United States were born in another country, by far the highest immigrant population in the world.

In the aftermath of the proposal’s exclusion, Democrats have indicated that they will look for alternative approaches to propose to MacDonough in the coming weeks.