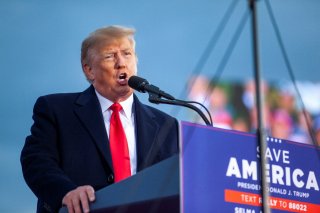 Judge Raymond Dearie, the special master appointed to review documents that the FBI seized at former President Donald Trump’s Mar-a-Lago estate, appeared to express doubt on Tuesday regarding Trump’s contention that he declassified the highly sensitive national security-related records discovered at his residence, according to a new Politico report.

“My view of it is: you can’t have your cake and eat it,” said Dearie, who was appointed as a judge by former President Ronald Reagan in 1986 and served a seven-year term, concluding in 2019, on the U.S. Foreign Intelligence Surveillance Court.

Trump and his lawyers have argued that the 11,000 documents taken from the Mar-a-Lago residence last month were rightfully in his possession, including about 100 bearing classification markings.

Dearie, who was selected last week as the special master by Trump-nominated U.S. District Court Judge Aileen Cannon, had asked Trump's attorneys for more information about those sensitive documents. However, the attorneys told the judge in a letter on Monday that they didn’t want to disclose such information yet because it could force them to prematurely “disclose a defense to the merits of any subsequent indictment.”

“I can’t allow litigation strategy to dictate the outcome of my recommendations to Judge Cannon,” Dearie said, adding that if Trump’s lawyers will not assert that the records have been declassified and the Justice Department instead makes an acceptable case for them remaining classified, then, “as far as I’m concerned, that’s the end of it.”

In response, James Trusty, one of Trump’s attorneys, contended that the former president shouldn’t have to mount a defense now to criminal charges that have yet to be filed.

“It’s not about gamesmanship. It’s about not having seen the documents,” he said.

“We are not in a position, nor should we be in a position at this juncture, to fully disclose a substantive defense. We shouldn’t have to be in a position to have to disclose declarations and witness statements,” he continued, prompting Dearie’s response that Trump’s team was seeking to “have your cake and eat it.”

Last Friday, the Justice Department asked a federal appeals court to temporarily block a ruling by Cannon that prevents it from accessing hundreds of pages of classified records seized at Trump’s residence. The day before, Cannon had rejected the Justice Department’s request to resume a key part of its inquiry into Trump’s handling of government records.

“The district court has entered an unprecedented order enjoining the Executive Branch’s use of its own highly classified records in a criminal investigation with direct implications for national security,” the Justice Department wrote in its motion.