A Stimulus Deal Looks Unlikely. That Means Millions of Americans Will Suffer. 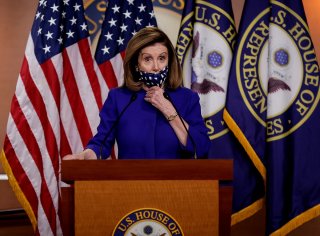 A new study shows that the poverty rate is higher now than at pre-coronavirus levels, suggesting that Americans can expect the rate to climb if Congress doesn’t act swiftly and strike a deal. The poverty rate increased from February to September 2020, from 15 percent to 16.7 percent, even taking into account the Cares Act stimulus relief pumped into low-income households, according to research conducted by Columbia University’s Center on Poverty & Social Policy.

Columbia researchers noted that the Cares Act benefits including stimulus checks and unemployment benefits wheeled 18 million people out of monthly poverty in April, but this figure dropped by more than 75 percent -- especially hurting Black and Latino families and those with children -- when the safety net measures expired.

“The Cares Act was immensely successful while it was around, despite its flaws,” Zachary Parolin, an author of the Columbia analysis, said. “Now it’s not around, and as a result, millions of more families are in poverty and are struggling to make ends meet.”

Negotiations for the next coronavirus relief package have been halted for months, as Treasury Secretary Steven Mnuchin and House Speaker Nancy Pelosi (D-Calif.) have failed to reach an agreement. The longer talks remain inconclusive, the more people enter poverty.

Mnuchin hinted Wednesday that another stimulus legislation “would be difficult” to pass before Election Day, suggesting that Pelosi’s reluctance to strike a deal has been a major issue. The Democratic House passed two multi-trillion-dollar proposals, both that were rejected by top White House aides and Senate Republicans. Mnuchin, however, presented a GOP counter-offer of a $1.8 trillion package that embraced some Democratic provisions. But Pelosi, top Democrats, and even some Senate Republicans rejected the proposal.

Pelosi contended in a letter to colleagues on Tuesday, “the Trump proposal falls significantly short of what this pandemic and deep recession demand. Significant changes must be made to remedy the Trump proposal’s deficiencies.

President Donald Trump has attempted to speed up the process, telling close aides to “go big or go home” and that he’s “ready to sign.” At one point, an economic advisor close to Trump said that Mnuchin could surpass Democratic spending in a GOP-led bill, which was originally priced at $3.4 trillion.

Pelosi, however, refuses to reach an agreement until certain language in the bill is mitigated, as well as funding for key provisions.

The $2 trillion Cares Act sent $1,200 stimulus payments to each adult, along with a $500 check per child and massive unemployment insurance of $600 per week, nearly tripling the average received jobless benefit.

In March, the poverty rate dropped to the lowest it’s been in late 2019 and 2020 at 12.2 percent, but then spiked to 19.4 percent in April when the unemployment rate hit its first double-digit peak during the economic crisis. Poverty levels are cyclical with the economy, so as the jobless rate hovered in the double digits, poverty rates loomed around 18 and 19 percent, according to poverty data provided by Columbia. But the reason poverty rates declined dramatically in March even with job losses, as reported by expert Angela Rachidi, a Rowe Scholar in poverty studies at the American Enterprise Institute (AEI), is because of the expanded safety net that brought millions of Americans temporarily out of poverty.

The Columbia model, however, reveals a slight improvement in the poverty rate for September, as it moved with the decreased unemployment rate of 7.9 percent.

While September’s data appears to be good news for the country, experts and Columbia researchers suggest that poverty rates will not return to pre-pandemic levels until more federal relief is flooded into the economy.

“If there are further gains in employment, the poverty rate might decline from what we’re looking at in September, but it’s hard to imagine the levels going back to pre-crisis levels unless either we see a Cares Act 2.0, or another round of stimulus payments, or we see a pretty quick recovery in employment,” Parolin said.

Rachidi echoed Parolin’s concerns, noting that elevated poverty rates will appear until a strong and sustained labor market is achieved when the country had “historically low unemployment numbers” hovering around three percent before the virus struck the U.S.

“Congress can certainly pass additional relief that… would provide temporary relief, so you might reduce poverty on a temporary basis, but until we get back to that strong labor market that we had in 2019 and in the beginning of 2020, you’re not going to see poverty rates that low without federal relief,” Rachidi said.

Although Trump called off talks for another stimulus package, he's now willing to spend a multi-trillion dollar amount. With this news, why is Pelosi balking at an agreement? Perhaps the speaker is stalling negotiations until after Nov. 3 to see if the Senate, as well as the White House flips blue, so that Democrats can draft a bill that neglects Trump administration rhetoric.

Mnuchin and Senate Majority Leader Mitch McConnell (R-Ky.) have pushed to vote on just one provision rather than a comprehensive package that addresses all of the nation’s issues. McConnell proposed a vote on replenishing the funds in the Paycheck Protection Program to swiftly help small businesses while Pelosi and Mnuchin proceed to negotiate. But Pelosi told Democrats on Tuesday that the idea was a nonstarter and believes that she has more leverage with the president, as he’s willing to up the stimulus price tag.

McConnell and some Democratic colleagues argued that any deal is better than nothing since the longer federal relief is blocked from recovering the economy, people will continue to lose jobs, small businesses will permanently close and millions will enter the poverty line.

“Republicans do not agree that nothing is better than something for working families,” McConnell said in a statement. “The American people need Democrats to stop blocking bipartisan funding and let us replenish the PPP before more Americans lose their jobs needlessly.”

Scott Winship, a resident scholar and the director of poverty studies at AEI, said that perhaps the most important focus that would ultimately prevent families from approaching the poverty line is to provide relief for small businesses. Winship noted that with business failure comes unemployment, and without unemployment benefits, more families will fall into poverty.

But Winship also said that there “ought to be some more assistance but on a much smaller scale than what the Cares Act did,” as it served as a “temporary bandage” to a much larger economic issue, dubbing the spending decision as “penny foolish and pound foolish.”

Rachidi also posed the question, “How sustainable is that federal relief?” in terms of solving the current economic recession, as it just fueled trillions of dollars into the economy to temporarily provide relief.

“We could have spent a lot less than we did and gotten the virus under control, and we wouldn’t have needed to have spent these trillions of dollars to expand the safety net,” Winship added.

Fiscal conservatives in the Senate have also blocked proposed stimulus packages, as it would add massive loads of money to the national deficit, a figure that’s grown significantly since the onset of the virus.

Negotiations are set to continue with pressure looming from both sides of the aisle, as Mnuchin hopes “to put money into the economy now.” But a stimulus deal looks further away than ever.

Image: U.S. House Speaker Nancy Pelosi adjusts her face mask as she announces her plans for Congress to create a "Commission on Presidential Capacity to Discharge the Powers and Duties of Office Act," after U.S. President Donald Trump came down with coronavirus disease (COVID-19), during a Capitol Hill news conference in Washington, U.S., October 9, 2020. REUTERS/Carlos Barria/File Photo.