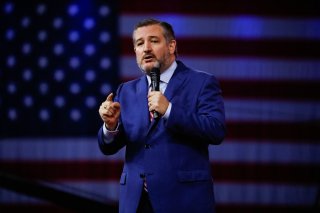 Sen. Ted Cruz (R-TX) has said that Republicans would be “idiotic” to dismiss former President Donald Trump as a potential 2024 presidential candidate.

“There are a lot of candidates out there feeling their oats and boasting, ‘I’m running no matter what. I don’t care what Donald Trump says.’ Anyone who says that is lying. That’s an idiotic statement for someone to make who’s actually thinking about running,” Cruz told the Washington Examiner on Friday after headlining a rally for Karoline Leavitt, the Republican candidate for New Hampshire’s 1st Congressional District.

“I don’t know what Trump’s going to decide—nobody does. Anybody who tells you they do is making things up. The whole world will change depending on what Donald Trump decides. That’s true for every candidate. That’s true of every potential candidate,” he continued.

Cruz, who is also seen as a potential Republican candidate for the presidential election, added that he won’t make a decision about 2024 until he knows more about Trump’s plans. The Examiner noted that the senator will run for reelection in Texas in 2024 if he does not seek to lead the Republican party’s national ticket.

Meanwhile, according to a Yahoo News/YouGov poll released last week, President Joe Biden is leading Trump by six points among registered voters in a hypothetical 2024 presidential rematch. Conducted September 2 to 6 with the participation of more than 1,600 adults, the survey found that if the next presidential election “were held today,” 48 percent of registered voters would pick Biden, while 42 percent would choose Trump.

The poll further revealed that more Democrats are now saying that America is “generally headed in the right direction” (48 percent) than “off on the wrong track” (38 percent). Just a month before, those figures were reversed. “As a result, Biden has strengthened his standing for 2024, which had been looking unusually weak for an incumbent,” Yahoo News wrote.

The results also showed that the high-profile FBI search at Trump’s Florida estate over classified documents is weighing on the former president.

“Less than half of Republicans and Republican leaners now prefer Trump (48%) over Florida Gov. Ron DeSantis (34%). A growing number of independents—39%, up 7 points from two weeks ago—believe Trump would be a weaker candidate in 2024 than in 2020,” Yahoo concluded, adding that 55 percent said that Trump should be barred from being elected again in the future if he is found guilty of “mishandling highly classified documents” or “obstructing” the ongoing investigation by the Justice Department.