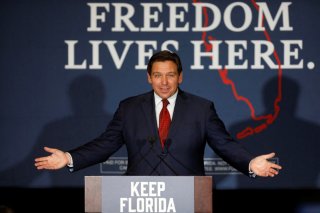 Javier Salazar, the sheriff of Bexar County, where San Antonio is located, noted that the criminal inquiry was still in its early stages and declined to name any potential suspects. However, he explained that the migrants appeared to have been “lured under false pretenses” and were “ultimately left to fend for themselves.”

Salazar added that a recruiter was paid a “bird dog fee” to gather some fifty individuals around a San Antonio migrant resource center. Then they were “taken to an airplane where they were flown to Florida and then Martha’s Vineyard under false pretenses of being offered jobs. For what we can gather, a little more than a photo op, a video op, and then they were left there,” he concluded.

Salazar said that the White House has not been in contact with his office. “This case would absolutely have to go federal, and I would welcome a call from the White House to discuss,” he said.

As reported by National Public Radio, DeSantis defended his decision on Monday, saying that the outrage over the flights was misplaced.

“It's really frustrating. Millions of people since Biden's been president, illegally coming across the southern border. Did they freak out about that? No,” the Republican governor, seen as a potential 2024 presidential candidate, told Fox News.

“You've had migrants die in the Rio Grande—you had fifty die in Texas in a trailer because they were being neglected. Was there a freakout about that? No, there wasn't,” he added.

Then on Tuesday morning, DeSantis’ office released a statement supporting the decision to send the migrants to Martha's Vineyard.

“Immigrants have been more than willing to leave Bexar County after being abandoned, homeless, and ‘left to fend for themselves.’ Florida gave them an opportunity to seek greener pastures in a sanctuary jurisdiction that offered greater resources for them, as we expected,” the statement read.

“Unless the MA national guard has abandoned these individuals, they have been provided accommodations, sustenance, clothing and more options to succeed following their unfair enticement into the United States, unlike the fifty-three immigrants who died in a truck found abandoned in Bexar County this June,” it continued.