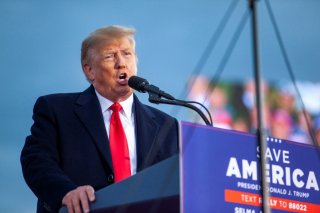 Additionally, the court filing asked the judge to require that the Justice Department return materials not covered by the scope of the search warrant. It also included a message that Trump had his lawyer give to a top Justice Department lawyer just days after the FBI search.

“President Trump wants the Attorney General to know that he has been hearing from people all over the county about the raid,” the message read.

The filing explained that “law enforcement…cannot be used as a weapon for political purposes.”

“Therefore, we seek judicial assistance in the aftermath of an unprecedented and unnecessary raid on President Trump's home at Mar-a-Lago, in Palm Beach, Florida,” it added.

The federal magistrate judge who approved the search reiterated on Monday that there was “probable cause that evidence of multiple federal crimes would be found” at Trump’s residence.

“Having carefully reviewed the Affidavit before signing the Warrant, I was—and am—satisfied that the facts sworn by the affiant are reliable,” wrote Judge Bruce Reinhart of the Southern District of Florida.

Meanwhile, Justice Department spokesman Anthony Coley noted that the agency would respond to Trump’s suit via the legal process.

“The Aug. 8 search warrant at Mar-a-Lago was authorized by a federal court upon the required finding of probable cause,” he said.

“The department is aware of this evening’s motion. The United States will file its response in court,” he added.

On Tuesday, Politico reported that the National Archives discovered more than 700 pages of classified material in fifteen boxes recovered from Trump’s estate in January, according to a May 10 correspondence between the National Archivist and Trump’s legal team.

“As you are no doubt aware, NARA (National Archives and Records Administration) had ongoing communications with the former President’s representatives throughout 2021 about what appeared to be missing Presidential records, which resulted in the transfer of 15 boxes of records to NARA in January 2022,” National Archivist Debra Wall wrote.

“In its initial review of materials within those boxes, NARA identified items marked as classified national security information, up to the level of Top Secret and including Sensitive Compartmented Information and Special Access Program materials,” she added.