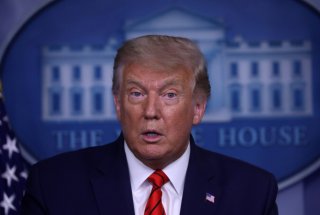 Former President Donald Trump on Sunday demanded that the FBI return seized documents that he claimed are protected by attorney-client and executive privileges, according to a new Axios report.

“Oh great!” Trump wrote on his social media platform Truth Social. “It has just been learned that the FBI, in its now famous raid of Mar-a-Lago, took boxes of privileged ‘attorney-client’ material, and also ‘executive’ privileged material, which they knowingly should not have taken.”

He continued: “By copy of this TRUTH, I respectfully request that these documents be immediately returned to the location from which they were taken. Thank you!”

On Saturday, citing unidentified sources familiar with the investigation, Fox News reported that the FBI seized five boxes at Mar-a-Lago that included information covered by attorney-client privilege. The news outlet also claimed that its sources said some records could be covered by executive privilege.

Meanwhile, CBS News reported that weeks before the Mar-a-Lago search, a Trump lawyer signed a document certifying that all classified materials had been removed from Trump’s Florida estate, according to two sources familiar with the timeline of events and the decision to seek the search warrant.

“[T]hey didn't need to ‘seize’ anything,” Trump wrote on Truth Social on Friday. “They could have had it anytime they wanted without playing politics and breaking into Mar-a-Lago. It was in secured storage, with an additional lock put on as per their request. … They could have had it anytime they wanted—and that includes LONG ago. ALL THEY HAD TO DO WAS ASK,” he claimed.

Trump spokesperson Taylor Budowich added: “Just like every Democrat-fabricated witch hunt previously, the water of this unprecedented and unnecessary raid is being carried by a media willing to run with suggestive leaks, anonymous sources, and no hard facts.”

House Intelligence Committee Chair Rep. Adam Schiff (D-CA) told CBS News on Sunday that he has yet to see evidence to support Trump’s assertion that some of the seized documents were declassified.

“We should determine, you know, whether there was any effort during the presidency to go through the process of declassification. I've seen no evidence of that, nor have they presented any evidence of that,” he said.

“A former president has no declassification authority. And the idea that eighteen months after the fact Donald Trump could simply announce, ‘Well, I'm retroactively declassifying, or whatever I took home had the effect of declassifying them’ is absurd,” Schiff continued.

Schiff also noted that it is a “serious problem” if Trump’s attorneys did not actually turn over all classified or national security information when it certified that it did so in mid-January.