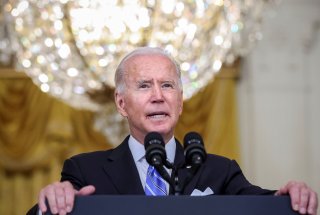 New data released earlier this week by the Federal Reserve Bank of New York has revealed that student loan debt hit yet another all-time high in the first quarter of 2022. The record-setting $1.59 trillion in total debt is a $14 billion increase from the fourth quarter.

As reported by CNBC, this particular debt category now accounts for roughly 10 percent of total household debt, which is nearing $16 trillion. It is the second-largest category of consumer debt—sitting only behind home mortgages.

The Fed report added that, in the first quarter, about 5 percent of aggregate student debt was more than ninety days delinquent or in default.

The data release comes as the White House appears to be nearing a decision on forgiving some student loan debt—likely no more than $10,000 per borrower. So far, the Biden administration has already canceled more than $17 billion in student loan debt for about 725,000 borrowers.

Per CNN, approximately 19 percent of households that have incomes below $125,000 have student loan debt, according to Matthew Chingos, vice president of education data and policy at the Urban Institute.

“That means about 81 percent of households below the income threshold don't have student loan debt and would not see a benefit if Biden takes new action,” the news outlet writes.

“Most households would still not benefit even if the President did not put an income threshold in place. Only about 18 percent of households with incomes above $125,000 have student debt,” CNN continues.

A recent Bankrate.com poll suggests that high loan debts are preventing many younger borrowers from saving for retirement and building wealth. In fact, about 60 percent of U.S. adults who have student loan debt have postponed making important financial decisions due to that liability.

“Despite this, a majority of U.S. adults with student loan debt say that their degree has unlocked career and salary opportunities that wouldn’t otherwise be possible, highlighting the complicated relationship that many Americans have with their student loan debt,” the Bankrate.com report notes.