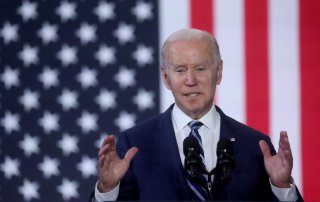 Amid the latest inflation numbers from the Labor Department, which showed that year-over-year price increases have surged by 8.5 percent, it’s not surprising to see that fast-rising food and gas prices have been the chief drivers of many Americans’ economic woes.

Cash-strapped Americans received more bad news when the U.S. Department of Agriculture (USDA) released an update to its Food Price Outlook for 2022 that found “all food prices are now predicted to increase between 4.5 and 5.5 percent.” That price increase is on top of a nearly 8 percent bump seen over the past year.

Now, taking a page from the playbook of several states that have already signed off on gas tax holidays, some local governments are trying to help reduce that burden on consumers by cutting taxes on groceries.

However, per CNBC, moves to slash these taxes might not be the answer, according to a new report from the Tax Foundation. Instead, the tax policy nonprofit suggested that one-time credits of $75 might offer a better solution since they would help the poorest households save more than 30 percent on their tax liability.

“There are far better ways to help lower- and middle-income households, including grocery tax credits, than the grocery tax exemption,” Jared Walczak, vice president of state projects at the Tax Foundation, told the business news outlet.

“It’s very poorly targeted towards low-income households,” he said of the proposed grocery sales tax cuts. “It is inferior to using the same amount of relief, either for a general [sales tax] rate reduction or credits.”

Currently, there are thirteen states that tax groceries. Seven of them tax at the level of the ordinary sales tax rate, including Alabama, Mississippi, and South Dakota. Meanwhile, Hawaii, Idaho, Kansas, and Oklahoma also provide credits or rebates to low-income households. Arkansas, Illinois, Missouri, Tennessee, Utah, and Virginia, tax groceries at reduced rates.

Walczak noted that most of the aforementioned states have proposed bills that would reduce or entirely eliminate those taxes on groceries.

“The intense focus this year has everything to do with high grocery prices,” he said.

According to the USDA, Americans might have to brace for even more price hikes in the coming months. Prices for poultry, fats, and oils are expected to rise by 6 to 7 percent, egg prices will surge by 2.5 to 3.5 percent, while dairy prices will rise by up to 5 percent.

Furthermore, it appears that restaurants won’t be immune to inflationary pressures either. Restaurant menu items—which have already increased nearly 7 percent year-over-year—are now expected to increase between 5.5 and 6.5 percent.

“The current problem is that the drivers of high food prices right now are not going away. It’s a seemingly intractable problem right now, because there isn’t a short-term solution on the horizon,” Meredith Wilson, founder and CEO of Emergent Risk International, told WTOP in Washington, D.C.

“We will start to see governments trying to find ways to push those prices down, because as you might imagine, it’s very politically unpalatable to have high food prices for any length of time,” she continued.