Will Surging Gas Prices Drive Americans Away From Traditional Vehicles? 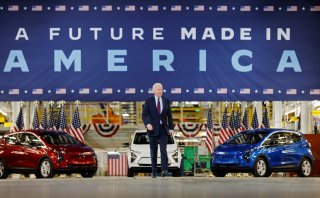 Millions of Americans are feeling pain at the pump as they scramble to quickly find ways to cushion the financial blow of surging gas prices. But with the national average for a gallon of gasoline still well above $4, per AAA, it appears that just waiting for prices to eventually head south could take several more weeks or even months. So, could the current sky-high gas prices finally accelerate the shift away from gas-guzzling vehicles?

According to Axios, it is not likely to happen. “Gas prices have spiked before, and while those jumps have changed consumers’ choices at the margins, pain at the pump has never been enough to reverse the long-term growth in the popularity of pickups and SUVs,” the news outlet writes. “High gas prices have also historically been linked to only a pretty modest decrease in the number of miles people drive. Even if this time is different, and this surge in gas prices does make more Americans seriously interested in insulating themselves from the next surge in gas prices, it’s not so easy,” Axios continues.

However, Axios did note that this current situation could be different. “The last time gasoline prices were this high, electric cars were barely a blip in the market,” Axios writes, adding that electric vehicles made up roughly 4.5 percent of the new car market in the United States last year. Whether or not the recent surge in gas prices is a prelude to something more significant remains to be seen. But according to some experts, it already has markedly changed consumer behavior.

AAA recently noted that demand for gasoline is “defying seasonal trends” and trending lower. “Usually this time of year, with warmer weather and longer days, we’d see an uptick in gasoline demand as more people hit the road,” Andrew Gross, AAA’s spokesperson, said in a statement. “But we had a slight drop in demand last week, which may be due to higher pump prices.” According to the company’s survey, 59 percent of drivers admitted that they would change their driving habits or lifestyle if the cost of gas reached $4 per gallon. And if gas prices ever hit $5, about 75 percent said they would need to adjust their lifestyle to offset the higher costs.

Some Americans are even putting in the time to learn how to get more miles per gallon to save on fuel costs. One example is California driver Wayne Gerdis, who claimed that he gets “well over 80 miles per gallon,” which is about 60 percent more efficient than what the Environmental Protection Agency says his plug-in Prius hybrid should be getting. CBS News said that Gerdis is considered one of the nation’s leading “hypermilers,” a community that takes fuel economy to extreme levels.

“Some try to reduce drag, drop weight and even draft behind semi-trucks,” CBS writes. “Gerdis often coasts downhill and takes a slow and steady approach to driving, like going 55 miles per hour on Interstate 5 outside of San Diego, even if it means he’s going a lot slower than virtually everyone else on the road.”