World Bank: Most Countries Are Heading for a Recession 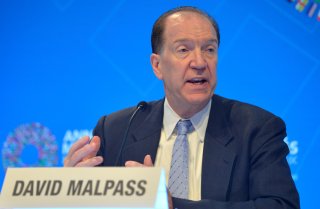 The World Bank’s latest global economic forecast indicates that most countries should begin preparing for a recession, as global economic growth is expected to slow down in the months ahead.

“For many countries, recession will be hard to avoid,” David Malpass, the World Bank’s president said in a statement, warning that a period of stagflation like what was witnessed in the 1970s is certainly possible.

Global growth is expected to slump from 5.7 percent in 2021 to 2.9 percent in 2022, which is markedly lower than the World Bank’s January estimate of 4.1 percent. Growth will likely hover around that level until 2024 as inflation remains above target in most countries.

Meanwhile, growth in advanced economies is predicted to sharply drop from 5.1 percent in 2021 to 2.6 percent in 2022—1.2 percentage points below projections in January.

“The war in Ukraine, lockdowns in China, supply-chain disruptions, and the risk of stagflation are hammering growth,” Malpass said.

“Markets look forward, so it is urgent to encourage production and avoid trade restrictions. Changes in fiscal, monetary, climate and debt policy are needed to counter capital misallocation and inequality,” he continued.

Seemingly supporting the World Bank’s forecast is a newly released CNBC CFO Council survey, which suggests that the United States will be tipped into a recession early next year.

“According to the majority (68%) of CFOs responding to the survey, a recession will occur during the first half of 2023. No CFO forecast a recession any later than the second half of next year, and no CFO thinks the economy will avoid a recession,” the business news outlet writes.

“CFOs are not uniformly of the view that the Fed won’t ultimately be able to control inflation. A little over half (54%) express confidence in the central bank, but that’s still not enough to alter their view of where current economic conditions and policy decisions are heading: into a recession,” the survey adds.

Meanwhile, Mark Zandi, chief economist at Moody’s Analytics, has admitted that there is a one in three chance of an economic recession this year and “even odds” for a downturn within two years.

“I would put the odds of a recession beginning in the next twelve months at about one in three, and probably close to even odds over the next couple of years,” he said last week on C-SPAN. “Recession risks are high, but I think that if we do suffer one over the next year or two, it will be a more typical, relatively mild economic downturn.”