Ranked: 5 Most Powerful Battleships In All of History 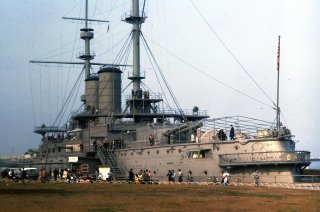 Key Point: It's not just about technical specs—human leadership can make or break a battleship.

Bismarck. The German Navy's Bismarck lived a short life that supplies the stuff of literature to this day. Widely considered the most capable battleship in the Atlantic during World War II, Bismarck sank the battlecruiser HMS Hood, pride of the Royal Navy, with a single round from her main battery. On the other hand, the leadership's martial spirit proved brittle when the going got tough. In fact, it shattered at the first sharp rap. As commanders' resolve went, so went the crew's.

Yamato. As noted at the outset, Yamato was an imposing craft by any standard. She displaced more than any battleship in history, as much as an early supercarrier, and bore the heaviest armament. Her mammoth 18-inch guns could sling 3,200-lb. projectiles some 25 nautical miles. Armor was over two feet thick in places. Among the three attributes of warship design, then, Yamato's designers clearly prized offensive and defensive strength over speed. The dreadnought could steam at 27 knots, not bad for a vessel of her proportions. But that was markedly slower than the 33 knots attainable by U.S. fast battleships.

Yamato met a quixotic fate, though less ignominious than Bismarck's. In April 1945 the super battleship was ordered to steam toward Okinawain company with remnants of the surface fleet, there to contest the Allied landings. The vessel would deliberately beach itself offshore, becoming an unsinkable gun emplacement until it was destroyed or its ammunition was exhausted. U.S. naval intelligence got wind of the scheme, however, and aerial bombardment dispatched Yamato before she could reach her destination. A lackluster end for history's most fearsome battlewagon.