30,000 Robots May Be Coming to the British Army 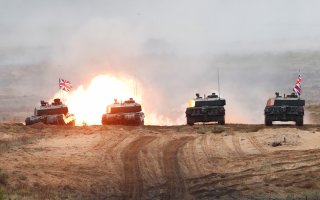 Here's What You Need to Know: The deployment of robots could address the recruitment shortfalls that the UK has faced in recent years.

The British Army has always been somewhat forward-thinking when it comes to military technology. It was among the very first to adopt and deploy the Maxim machine gun, and later formed the Machine Gun Corps. The British Army also experimented with bicycles and was among the first militaries to adopt trucks to move men and material.

In 1912, the Royal Flying Corps (RFC) became the air arm of the British Army before becoming the Royal Air Force in 1918; while during the First World War the British Army formed the first tank unit in the world, originally known as the Tanks Corps and later the Royal Tank Corps.

It thus seems quite likely that a “Royal Robot Corps” could be in the future for the British Army, at least according to the UK’s Chief of Defence, Gen. Sir Nick Carter, the Guardian newspaper reported. The Kenyan-born senior British Army officer said that “robot soldiers” could form an integral part of the British Army in the decades to come, where they will work alongside humans in and around the frontline.

“I suspect we could have an army of 120,000, of which 30,000 might be robots,” Carter said in an interview on Remembrance Sunday. However, he stressed that he was not setting any particular targets in terms of the numbers of robots that could be deployed or utilized by the army.

“If I projected forward another ten years, I think we should be in no doubt that warfare will look different, there will be robots on our battlefield in future—there already are today,” Carter added.

Machines to Fill the Ranks

The deployment of robots could address the recruitment shortfalls that the UK has faced in recent years. The British Army has faced troubles meeting its recruitment targets, and currently has just 73,870 trained soldiers when it calls for 82,050 to fill the ranks. Autonomous vehicles could fill the holes and reduce the dependency on human soldiers.

The British military has already experimented with military drones such as the i9 armed unmanned aerial vehicle (UAV), which was designed to be primarily used in indoor situations where it might be too dangerous to send live personnel. While the drone has multiple autonomous features, its twin shotgun barrels can only be remotely-controlled by a human operator.

Already the mere suggestion that machines could do the job of humans has been met with a notable backlash. There has been staunch opposition already worldwide to any military deploying autonomous “killer robots” that don’t require human intervention. The militaries of China and Russia have already experimented with such automated weapons platforms.

There have been moral questions raised about whether algorithms and machine learning should be used to determine when to take a life, while there remains the longstanding fear of machines rising up against their human masters that is the basis of so many science fiction stories. The UK’s popular Dr. Who TV series has addressed such conundrums countless times!