The Accident Prone MH-53E Could be Viewing Its End 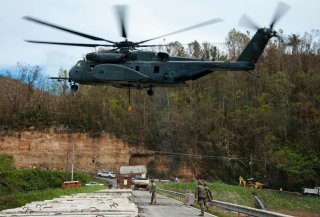 On Jan. 8, 2014, a U.S. Navy MH-53E Sea Dragon minesweeping helicopter crashed off Virginia Beach. Of the five people aboard, four were rescued. Two died in the hospital. The Navy called off the search for the fifth crewman, pilot Sean Christopher Snyder.

The three-engine MH-53E, 37 tons fully loaded, is one of the military’s most crash-prone aircraft. The Navy bought 46 Sea Dragons from Sikorsky in the early 1980s. Fourteen of them have been destroyed, killing 32 people in total.

It’s not for no reason that the Navy is eager to retire the MH-53E. The fleet’s 2021 budget proposal asks Congress for permission to sideline the Sea Dragons starting in 2022. Smaller MH-60s could replace them, although some lawmakers have urged the Navy to acquire new CH-53Ks for the minesweeping role.

As of 2008, the MH-53E fleet had a crash rate of nearly six incidents per 100,000 flight hours. On average, the Navy loses one of its approximately 3,000 aircraft every 100,000 flight hours. Helicopters crash at a slightly higher rate of roughly two per 100,000 hours. Depending on what you’re comparing it to, the MH-53E crashes at a rate between three and six times normal.

The giant helicopter’s old, complex design is one reason. Leadership is another. The way the Sea Dragon is used is also a factor.

The worst crash occurred in 1988. Eight sailors died. Among other incidents, MH-53Es also crashed in 2000, twice in 2002, once in 2003 and again in 2005 and 2008. In 2012, two Sea Dragons were destroyed in accidents and another was damaged. A Navy investigation of Helicopter Mine Countermeasures Squadron 15 and the overall Sea Dragon force uncovered lax training procedures.

The sailing branch fired HM-15 commander Sara Santoski. “Initial findings from the assessment show that Cmdr. Santoski failed to strictly enforce appropriate operational, maintenance and safety standards and that she failed to ensure a proper command climate,” the Navy said in a statement.

But the MH-53E itself is partly to blame for its history of destruction. An upgraded version of Sikorsky’s classic S-65, the Sea Dragon is an analogue helicopter in a digital age. “When you pull the stick, you’re pulling actual metal wires on an engine,” a former sailor told Military.com on condition of anonymity.

“There’s not some electronic signal telling the engine to rev up or rev down, or telling the blades to angle up or angle down. It’s just a really old system and leads to a lot of mishaps.”

Moreover, the MH-53E spends most of its time at low altitude, towing a pickup truck-size mine-hunting sled—a sort of raft fitted with equipment for triggering sea mines. “If you can imagine fighting the winds over the ocean,” the sailor told Military.com. “It puts a lot of stress on the aircraft.”

The Navy for a long time stood by the Sea Dragon despite its high accident rate. “The MH-53E has been a workforce for the Navy for [many years],” Capt. Todd Flannery said in 2014. “I am confident and proud of the contributions the Sea Dragon has made and look forward to its continued service to the fleet.”

That “continued service” could end in just a couple of years.

David Axe served as the defense editor of The National Interest. He is the author of the graphic novels War Fix, War Is Boring and Machete Squad.