After Decades, Germany's Leopard I Tank is Still Fighting Everywhere 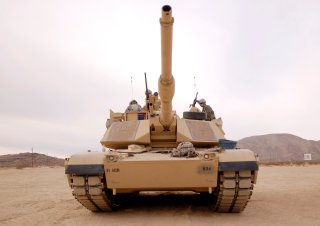 Here's What You Need to Remember:Time will tell, but the Leopard I probably won’t drive off into the sunset just yet.

The Leopard I was West Germany’s first post-war domestically designed and manufactured tank. The German designs was good—so good, that it is still in service with a number of countries. Here’s why.

In post-war West Germany, the Bundeswehr, the West German Army, was equipped with American-supplied M47 and M48 Patton Main Battle Tanks. Though capable, it was increasingly obvious that the Pattons were becoming outmatched by Warsaw Pact armored firepower and were in serious danger of becoming obsolete.

West Germany had considered buying the larger British Chieftain tank, or the American M60, 45 and 51 tons respectively. They were both rejected by Bonn as too heavy and not mobile enough. So West Germans decided to build something at home—something that could be the new European standard.

The design rules were stringent: the tank had to have a high power-to-weight ratio of 30 horsepower per ton, have onboard protection from radiation and chemical weapons, and be able to withstand direct hits from 20 millimeter cannon fire.

The emphasis was centered on high mobility and high firepower, with armored protection coming second. German designers settled on a British-made 105 millimeter tank gun to provide the necessary firepower.

Tactical planning at the time assumed that shaped charges—explosive projectiles that can shoot superplasticized jets of metal through thick amounts of armor—could not be adequately defended against. Doctrine maintained that if you couldn’t resist them, then instead hopefully outrun and out shoot the enemy.

The result was the Leopard I. That tank became a legend and was quickly snapped up by many NATO member countries—Australia, Belgium, Canada, Greece, Italy, the Netherlands, Norway and Turkey were allured by the relatively high speeds—40 miles per hour—and the price point—$250,000.

Incremental upgrades were given to the machine throughout its life—armored skirts to protect the tracks and a barrel sleeve to better regulate internal barrel temperatures when firing. Germany also added improved armor, computerized fire control, and bolt-on composite or plastic armor panels, which has resulted in a dizzying number of Leopard I variants.

Thanks to an attractive price point and a plethora of upgrade choices, the Leopard I remains in use with a number of countries worldwide. Leopard’s company website says that the Leopard I has been an “international success story…Since 1965, more than 4,700 units have been manufactured and remain in service in eleven countries on five continents.”

What makes the Leopard still attractive over half a century after inception is its customization and upgradability. “Thanks to its continuous upgrading and modernization process, the LEOPARD 1 remains a state-of-the-art design. Users of earlier versions have the choice of several retrofit kits to adapt the product configuration, putting corresponding emphasis on firepower, protection, mobility and logistics as needed.”

Still, the Leopard I platform did face some challenges while under Turkish command in Syria.

The Leopard website probably summarizes the future of the Leopard I best stating, “the modular design allows the deployment of this battle tank well into the middle of the 21st century, always well adapted for any threat scenario.” Time will tell, but the Leopard I probably won’t drive off into the sunset just yet.