The Air Force Is Cutting, Not Killing, Its C-130 Hercules Cargo Aircraft Fleet 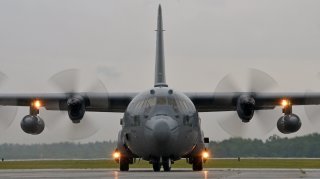 Here's What You Need to Know: As a propeller-driven aircraft, a C-130 is able to land in more rugged or austere environments because debris will not get stuck in its engine. This fact lends further support to the idea of arming the C-130s as warplanes so that they can defend their cargo against incoming fire or even launch offensive attacks.