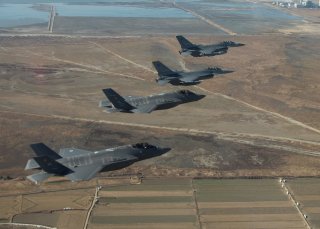 It is no secret that China’s presence as a peer competitor is driving the intensity of the U.S. Air Force’s move to embrace a future fighter roadmap. Gen. Mark Kelly, commander of the Air Force’s Air Combat Command, explained the importance of the future fighter roadmap for preparing for a conflict with China during the Air Force Association’s 2021 Air, Space & Cyber Conference last week.

While the U.S. Air Force spent years fighting in the Middle East with equipment developed for Cold War competition, China reconstituted its force to focus on countering the United States.

That process began after China studied the U.S. military’s success during Operation Desert Storm in 1991 and continues today. Kelly added some interesting specifics regarding China’s strategic effort to match and pass the U.S. Air Force in terms of air dominance and warfighting sophistication.

“Their anti-access, area-denial defensive construct is specifically designed to exploit the capabilities and limitations of a NATO force design tasked to operate outside of NATO airspace,” Kelly said.

The vast expanse that is the Pacific region is fundamental to China’s anti-access/area-denial strategy. Chinese anti-ship missiles, long-range ballistic weapons, mobile missile launchers, ships, and drones are all intended to prevent the U.S. military from accessing areas close to China’s borders.

China is relying on being able to fight from its own sovereign territory and leverage every possible advantage. This is why China has more actual air power presence in the Pacific region, a circumstance Air Force Chief of Staff Gen. Charles Brown said needs to change. This means the United States will continue to seek more basing opportunities for its growing force of fifth- and sixth-generation aircraft as well as stealthy drones.

“We need to remind folks and we need to remind ourselves occasionally that we are the sons and daughters of airmen who designed, built and operated SR-71s over sovereign territory,” Kelly said. “Designed and built RQ-170s, B-2s, and now B-21s to operate over sovereign territory. Built cyber capabilities to punch into sovereign networks. And that our adversaries will compete in our sovereigns if we let them. If you’re going to be a resident world power, you have to step up and compete not just in the global commons, but also in the highly-contested sovereigns.”