The Air Force is Upgrading Weapons for Next-Gen Aircraft 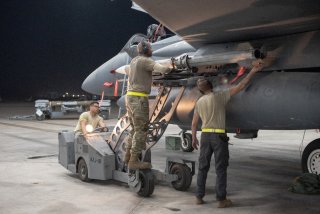 The Air Force is making a special effort to ensure its weapons are modernized, upgraded, and developed as quickly as other elements of fifth- and sixth-generation aircraft to ensure that air lethality keeps pace with new technology.

“You’ve got to be careful, as we purchase and run around with fifth-generation aircraft that we’re not putting third-generation munitions on them. So there’s a balance,” said Lt. General David Nahom, Air Force Deputy Chief of Staff for Plans and Programs. Nahom was speaking at a discussion in July hosted by the Mitchell Institute for Aerospace Studies.

The Air Force has made considerable effort to modernize its arsenal of weapons through efforts such as software enhancements to the AIM-120D Advanced Medium-Range Air-to-Air Missile and AIM-9X Sidewinder. Still, some weapons developers are concerned there might not be enough innovative next-generation weapons programs and technological breakthroughs. Nahom emphasized the importance of sustaining and improving Research, Development, Test, and Evaluation (RDT&E) efforts to identify paradigm-changing new weapons technologies.

“We’ve also got to make sure we have enough resources, money, in RDT&E efforts into advanced munitions that are going to be those munitions that we need in high-end fights that are beyond what you’re seeing right now,” Nahom said. “ We’re certainly balancing the money. I actually think we’re at a good balance right now. I think I would actually like a little more money into some of the advanced RDT&E efforts, and we’re going to continue working with OSD to continue pursuing those, but I think we’re at a pretty good balance right now.”

For example, the AIM-9X has been adapted to fire off-boresight, meaning it can change course in flight and redirect to attack an enemy aircraft flying on the side or even behind of the attacking jet. This means a fighter jet does not have to have a strictly linear, straight ahead firing trajectory but can attack at all angles. There have also been hardening upgrades to a wide range of weapons like the AIM-120D which could be referred to as efforts to defeat countermeasures. For instance, if an adversary seeks to locate and jam a targeting frequency essential to the weapon’s guidance, newer software upgrades can enable weapons like the AIM-120D to engage in frequency hopping and switch frequencies to stay on course to its target.

The upcoming fourth software drop for the F-35 Lightning II is expected to be a big part of this. Each successive software “drop,” or series of enhancements, will expand the weapons envelope for the aircraft by adding interfaces, fire-control adjustments, and the required levels of targeting and computing technologies.

The fourth software drop for the F-35 will enable the promising cutting-edge GBU-35/B StormBreaker precision-guided bomb to launch from the aircraft. The StormBreaker introduces a new technological ability to track and destroy targets through a data link with pilots at distances up to forty nautical miles in all weather conditions. The weapon is known for its tri-mode seeker which combines infrared homing, millimeter-wave radar, and laser-guidance technology to operate with precision in all weather conditions depending on the method best suited for a particular target.

Another challenge facing the Air Force is that it may simply need more air-to-air and air-to-ground missiles to be prepared for a peer conflict with a much larger number of targets. Air Force Lt. Gen. David Deptula (Ret.) suggested that a new conflict could include as many as 100,000 aim points. That figure is far greater than the fifteen to twenty aim points per day that the Air Force targeted in operations in Syria and Afghanistan.

“Often, the limiting factor in wargames in the Air Force as well as the other service components is limited number of munitions,” Deptula said.