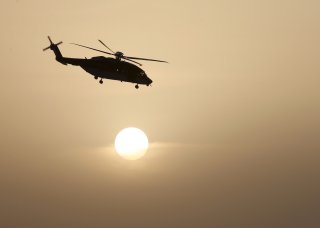 Here’s What You Need to Remember: Saudi Apaches are alleged to have caused mass civilian casualties in at least three incidents totaling 114 civilian deaths.

Shortly after taking office, President Joe Biden vowed in a foreign policy speech “…we are ending all American support for offensive operations in the war in Yemen, including relevant arms sales.”

The deal, if approved by Congress, would see 350 civilian contractors and two U.S. government officials oversee maintenance to keep Saudi Arabian helicopters and their weapons operational, train crew to operate them, and implement upgrades.

The authorization is perceived as reflecting a softening of the Biden administration’s critical stance towards Riyadh but has been defended on the basis that Saudi attack helicopters have been primarily employed for defense of the Saudi border against insurgent attacks, rather than the airstrikes infamous for killing or wounding an estimated eighteen thousand Yemeni civilians.

If the aim of Biden’s vow was to cut funding for any equipment sustaining Riyadh’s war in Yemen, then even, say, troop-carrying UH-60L/M utility helicopters listed in the maintenance contract might be considered objectionable. But if the ban targets systems directly implicated in the indiscriminate air attacks, then it matters whether Saudi Arabia’s Apache helicopters were used offensively and in operations that killed civilians.

With that in mind, this article surveys what media reports and the book Hot Skies Over Yemen Vol.2 by aviation historian Tom Cooper (with whom I also corresponded) reported regarding where and how Saudi Apaches were used in the conflict, as well as where they crashed or were shot down.

The Boeing AH-64 Apache is a heavily armored and armed twin-engine attack helicopter. It combines advanced sensors with a 30-millimeter cannon, Hellfire anti-tank missiles, and anti-personnel rocket pods. AH-64s have a combat radius of around 100-186 miles depending on loadout, meaning Saudi Arabia-based AH-64s can only sustainably operate over the north- half of Yemen.

Saudi Arabia acquired its first twelve AH-64As in 1993. In the last decade, the fleet has been scaled up with dozens of new buys as well as remanufacturing of older aircraft with two successor models: the AH-64D Apache Longbow optionally carrying a surface-scanning radar, and the up-engined and re-instrumented AH-64E Apache Guardian. Per World Air Forces 2021, twenty-five (going on forty-eight) AH-64s serve in the Royal Saudi Land Forces (RSLF), while another twenty-four (going on thirty-six) AH-64D/Es serve in the praetorian Saudi Arabian National Guard

Additionally, two other Saudi-operated helicopters over Yemen may be misidentified as the better-known Apache: 13-15 lighter but Hellfire-armed Bell 406 Combat Scout helicopters (akin to retired OH-58D Kiowa Warrior). By 2019, these were reportedly no longer used operationally having been replaced by AH-64Es.

Additionally, in 2017 the SANG began receiving 36-48 smaller but still heavily armed Boeing AH-6is. Dubbed the “Little Apache” the type reportedly had been “proving itself in Yemen,” though one was lost in a 2018 training accident that killed a U.S. instructor.

Cooper told me “Initially, [Saudi Apaches] were used as a ‘fire-brigade’ primarily along the border, ie. wherever there was a problem, and there were a lot of these, because the border is very long and the terrain rugged. They would be sent to investigate and then counterattack. Ground forces would move in afterwards.”

According to Hot Skies, Houthi man-portable surface-to-air missiles and towed M167 20-millimeter flak guns damaged several Apaches. The Houthis claimed shooting down two AH-64s on May 7 and 9 on the border. Riyadh only confirmed that one Apache force landed in Najran, Saudi Arabia for non-combat reasons.

As Coalition forces advanced, in August at least eight AH-64s were based at the al-Safir missile base, near Marib, Yemen. Several were destroyed there on the ground by a Houthi-launched Tochka missile strike on September 4 which killed over one hundred Coalition soldiers.

Nonetheless, according to Cooper, Emirati Apaches “decimated” a Houthi-allied armored brigade equipped with M60A1 Patton tanks and BMP-2 fighting vehicles attempting to retake the Marib Dam. By September Michael Knights wrote that ground forces advancing towards Taizz, situated 250 miles south of the Saudi border, as being “backed by Emirati and Saudi AH-64 Apache helicopters.” This could be an error, as there are no reports that Saudi AH-64s were based in southern Yemen, only Emirati aircraft.

A lone Emirati Apache is confirmed to have crashed in al-Jawf on October 17, 2017 for “technical reasons.”

Meanwhile, in August, Cooper writes Apaches “vigorously” supported a new Saudi-backed offensive into Yemen across the Wadia border-crossing. Houthi forces claimed to have shot down two RSLF AH-64Ds with missiles on August 4 (over Hajjah) and 21 over Jizan, Saudi Arabia. The Saudis admitted to the loss of the latter while claiming the former made a forced landing due to a ‘technical failure.”

Likely referring to the former incident, Cooper wrote to me “… by summer 2015, [Apaches have] been deployed for forays deep inside Yemen. One was even shot down about 20 kilometers south of the border: the crew managed to fly it some 3-5 kilometers short of the border before making a crash-landing. Was then evacuated and the helicopter then secured by the Special Forces.”

Meanwhile, on September 15 Apaches allegedly attacked civilians in the town of Bani Zelan, just six miles south of the Saudi border in Hajjah province. Residents and a medic told Reuters over telephone that Apaches had rocketed down, killing twenty-five civilians including women and children as they fled their homes “for no reason.” A second helicopter attack then killed three medics and two civilians treating the wounded. An anonymous Saudi official told the New York Times this was “totally false news.”

The Houthis claimed shooting down two more Apaches in September, and one more on January 8, 2016, but none of these claims are corroborated.

Blood in the Red Sea

The waters of the Red Sea around Yemen also became a warzone as the anti-Houthi Coalition established a naval blockade seeking to interdict Houthi arms suppliers.

On October 22, 2015, an Apache allegedly destroyed seven civilian fishing boats near the island of Uqban in Yemen and strafed the ship-wrecked survivors with cannon fire, as recounted by survivors to Sharif Kouddous of the Global Post. The Red Cross reported at least forty-two fishermen, but possibly up to one hundred, fishermen were killed. A Saudi spokesperson insisted they were “…sure 100 percent that they were smuggling weapons from the big ships to small boats.”

Then on March 16 2016, a helicopter claimed to be an Apache reportedly strafed a boat carrying 145 Somali at the Bab-el-Mandab strait, killing 42. Both Saudi Arabia and the UAE denied responsibility. Human Rights Watch claimed “photos of the boat taken the next day show damage consistent with gunfire from an aerial attack.”

Subsequently, Coalition helicopters were linked to several other smaller-scale killings of Yemeni fishermen, though it’s possible these may have been ship-based naval helicopters.

The sparsely populated al-Marah governorate in eastern Yemen saw little fighting, where the Saudis instead competed with the UAE for influence. In 2018 Riyadh established a military base in al-Ghaydah airport, nearly two hundred miles south of the Saudi border, which in July reportedly hosted at least two Apaches. By 2019, these had reportedly been used to bomb a police checkpoint, defend a convoy from an ambush, and intimidate protestors opposed to the Saudi occupation.

On September 14, 2018, an AH-64 crashed due to “technical issues” fighting “terrorists and smugglers” in al-Mahra—possibly referring to local Al Qaeda (AQAP) elements.

Cooper writes that in the winter of 2015-2016, “Emirati and Saudi AH-64s were extremely active in rocketing enemy ground positions and knocking out whatever armor the Houthi/Saleh coalition managed to bring to the frontlines...” Besides supporting an offensive on Hajjah city, they also were employed against Houthi fighters infiltrating into Saudi Arabia via tunnels.

He noted Riyadh admitted the loss of an AH-64 in unclear circumstances at Najran, Saudi Arabia first claimed by the Houthis December 29, 2016. Houthi media claimed another AH-64 downing in Saudi Arabia on May 31, 2018, which was not confirmed.