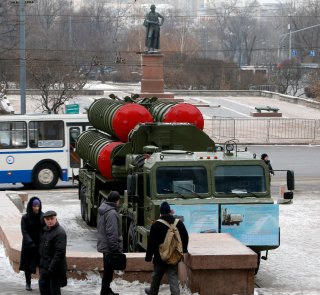 Here's What You Need to Remember: Russian defense observers argue that the new interceptor missile will further widen what they believe to be the already considerable gap between Russian and U.S. missile defense capabilities.

The statement was accompanied by a video from the launch, published on the Defense Ministry’s Youtube channel. The clip showed the missile being transported, loaded into a silo, and launched. “The ABM system’s new interceptor missile reliably proved its inherent characteristics while the combat teams successfully accomplished the task, striking a mock target with the required accuracy,” Aerospace Force Anti-Ballistic Missile Defense Formation Major Gen. Sergei Grabchuk told reporters. The Defense Ministry’s statement indicates that this was not the missile’s first test, though concrete production and delivery timelines remain elusive. Following an earlier test of what appears to be the same missile, Deputy Commander of the Air and Missile Defense of the Aerospace Forces Andrey Prikhodko told Russian media that the missile “considerably surpasses those of weapons operational today” in such categories as range, accuracy, and service life. Russian defense sources believe that the new interceptor missile can handily outperform the anti-missile capabilities of the S-400 missile defense system—in particular, Russian experts maintain that it can reliably intercept hypersonic ballistic missiles.

The missile is launched at an initial speed of one thousand kilometers per hour, rapidly accelerating to supersonic speeds. Elsewhere, Russian sources stated that the missile travels in excess of three kilometers or more than four times the speed of a Kalashnikov assault rifle. Still, nothing has been confirmed by way of the weapon’s concrete specifications.

Russian defense observers argue that the new interceptor missile will further widen what they believe to be the already considerable gap between Russian and U.S. missile defense capabilities. “Comparing Russian and American missile defense capabilities, it is not difficult to notice that, in contrast with Russian missile defenses, US missile interceptors have the speed of a turtle. The [new missile interceptors] ensures the highly effective interception of any target, possibly including those of the hypersonic kind,” a Russian defense analyst told the aviation publication Avia.pro.

The Pentagon has noted the need to invest in modernized missile defenses in the face of growing Russian and Chinese capabilities, as well as looming challenges from such regional actors as North Korea. During an event hosted by the Center for Strategic and International Studies in February, Air Force Gen. John Hyten stressed the need for a new, integrated missile defense infrastructure to defend the United States from sophisticated ballistic missile threats into the coming decades. Hyten joined other senior U.S. officials, including Vice Admiral Jon Hill and Air Force Gen. Glen VanHerck, in stressing that the ongoing  Next Generation Interceptor project is a crucial next step in guaranteeing the long-term integrity of U.S. missile defenses. It is expected to enter service by 2028.