America's Carriers Are Being Hamstrung By A Range Problem 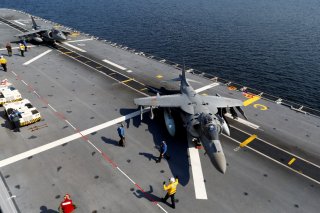 Here's What You Need To Remember: America’s ships increasingly suffer from the same range obsolescence that afflicted armored knights during the Middle Ages. While knights were well-equipped to dispatch any crossbowman they encountered on the field of battle, their limited range forced them to get close to their opponent before inflicting any damage. This gave less powerful, but longer-ranged combatants an eventually insurmountable advantage.

There are, however, some naval experts who would push back against the Washington establishment’s pro-carrier sentiments. One such expert is Dr. TX Hammes, a retired Marine Corps colonel and a Distinguished Research Fellow at the National Defense University’s Institute for National Strategic Studies. The Center for the National Interest hosted Hammes for a private breakfast event on Wednesday, June 5, 2019 during which he outlined his innovative, if not controversial, proposal to shift the focus of the U.S. Navy from its aircraft carriers to a large armada of missile-armed merchant ships which are better equipped to handle the challenges of modern naval warfare.

Matt Reisener is the assistant to the president at the Center for the National Interest. This article first appeared last year.