America's Sixth-Generation Fighter is Flying, But Who Built It? 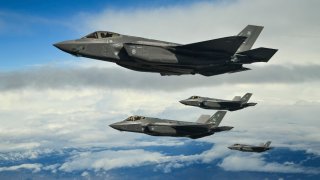 Here's What You Need To Remember: Air Force developers seem to have come to the belief that new generations of stealth-fighter technology were sufficiently “approaching” if not “here,” inspiring a wish to build a new platform and push the current “art-of-the-possible” to the maximum extent.

The fact that the Air Force’s new sixth-generation stealth aircraft has taken to the skies raises too many interesting questions to engage at one time, however, many wonder who built the one that flew already? And what it might mean for the F-35 and F-22 jet fighters?

While the actual vendor responsible for producing the first Next Generation Air Dominance stealth fighter to fly is not available for understandable security reasons, there are only a handful of vendors capable of engineering something like this. While specifics are not known or available, and no vendor has actually confirmed that a prototype actually exists, some of the main players likely capable of building the aircraft might be Lockheed Martin, Northrop Grumman or Boeing.

Lockheed and Northrop have extensive experience and expertise regarding stealth technology, an attribute any sixth-generation fighter is most likely to incorporate, however there is little value in speculating given the importance of secrecy to the project. After all, next to nothing is known about the new, fast-progressing B-21 stealth bomber slated for its first flight in the next year or two.

However, it takes little imagination to examine many of the most cutting-edge technical trends with a mind to their likely impact upon any kind of new sixth-generation platform. One immediate and interesting question relates to the F-35 stealth fighter.

While early subcomponent prototyping and conceptual was underway over the last year, some raised the question as to whether it made sense to even build a new airframe given the promise and sophistication of the F-35. There are two interesting points here, one is that there likely are technological advances significant enough to inspire an interest in building an entirely new platform, and the other is the expectation that a huge priority will be placed upon fifth-to-sixth generation interoperability.

As for the first point, some early questions seem to have been resolved to a certain extent, given that a new sixth-generation aircraft has already flown. Previous deliberations regarding a sixth-generation fighter balanced themselves upon what may at the time have been the unknown maturity of various promising new weapons and technologies nearing a threshold of operational possibility. For instance, some now-in-development next-generation stealth technologies, including new radar-evading configurations, coating materials and advanced thermal-signature reduction are fast-approaching levels of combat readiness. Also, work on new stealth or artificial-intelligence-enabled sensors to ensure overmatch for decades to come may be showing promise as well.

Air Force developers seem to have come to the belief that new generations of stealth-fighter technology were sufficiently “approaching” if not “here,” inspiring a wish to build a new platform and push the current “art-of-the-possible” to the maximum extent.

This challenge, explored by a Naval Postgraduate School essay called “The 6th-Generation Quandary,” posed the question as to whether it might be equally if not more effective to postpone formal sixth-generation development until truly breakthrough advances emerge, while pursuing advanced variants of current, yet upgradable platforms in the interim.

This issue, framed years ago by this essay, seems to have evolved in some interesting ways, at least to the point wherein the Air Force decided to go ahead and “build” a new sixth-generation aircraft.

In and of itself, the decision answers some questions and seems to suggest that indeed sufficiently impactful new technologies were here or arriving to an extent justifying the interest in building a new jet.