AOC and The Justice Democrats: The Future Is Now for the Democratic Party? 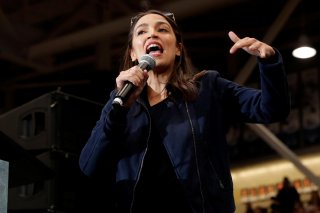 In 2017, a group of staffers from Bernie Sanders’s 2016 campaign started the Justice Democrats, a progressive group loosely aligned with the Democratic Party. Since then, the Justice Democrats — along with an array of other left-leaning progressive groups — have become a significant presence in Democratic primary contests, reflecting both generational and establishment-insurgent fissures within the party.

Next week, on June 23, two long-term incumbents in New York will face younger challengers from the Democrats’ left flank. Justice Democrats have endorsed Jamaal Bowman, who faces Representative Eliot Engel in the primary for New York’s 16th district. Bowman is not the only progressive challenging Engel, but the endorsement of the Justice Democrats may give him a leg up in the race.  Engel got his start in 1988 when he took the seat of 10-term Representative and former NYC police officer Mario Biaggi who resigned before the election after being convicted of corruption. Bowman raised more money than Engel in April and May, but Engel has more money in the bank. Engel has been endorsed by Hillary Clinton and Nancy Pelosi, while Bowman has received the nod from AOC, Elizabeth Warren, and Bernie Sanders.

Another primary contest on Tuesday in New York’s ninth district features Yvette Clark, an African American woman first elected to Congress in 2006 after serving on the New York City Council. One of her challengers this year from the progressive left, Adem Bunkeddeko, came within 1,800 votes of beating her in 2018.

The Justice Democrats and others on the Democratic left are also making their presence felt in state legislative contests and city-wide offices in states across the country as a recent story in The Hill documented. At the congressional level thus far this cycle, only one Justice Democrats-endorsed candidate, Marie Newman, has defeated a Democratic incumbent — Dan Lipinski in Illinois.

These groups are benefitting from a substantial advantage Democrats have over Republicans in party identification among the young. In Pew’s latest cumulative summary of data collected in 2018 and 2019, 54 percent of millennials identified as or leaned to the Democratic Party, while only 38 percent identified or leaned to the GOP.

Neither party is unfamiliar with challenges from its extremes, and the Justice Democrats and its sister organization, the Sunrise Democrats, are pulling the Democratic Party leftward. The Sunrise Democrats started in 2014 as a 501(c)(3) educational organization and added a 501(c)(4) political arm in 2017. In 2018, the group which focuses on climate change and a Green New Deal, endorsed Ocasio-Cortez, Tlaib, Omar, and Deb Haaland (NM-1). The Justice Democrats focus on a broader platform than the climate-centered Sunrise Democrats, including the Green New Deal, Medicare for All, free public college, campaign finance, and criminal justice reform — including abolishing ICE and the death penalty. There are many cross endorsements between the two groups. Brand New Congress, founded in 2016, also claims Ocasio-Cortez. It focuses on reforming Congress and has many of the same goals and founders as the Justice Democrats. Another group, Our Revolution, concentrates on local races.

The Democratic Congressional Campaign Committee’s vow to break ties with pollsters and political consultants who worked for primary challengers hasn’t slowed the momentum of challenges from the left. Tuesday’s primaries — along with a handful later this summer — that feature these groups will provide some indication of how strong the rising left is.

This article by Karlyn Bowman first appeared in AEIdeas on June 19, 2020.