Arctic Warfare: The Air Force Is Preparing Its F-35 for Bitter Cold 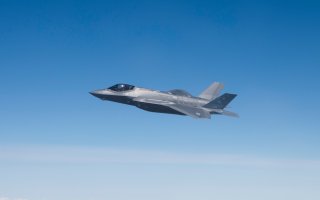 Here's What You Need to Know: Cold weather combat is taking on greater urgency as global competition for influence, power and presence increases in the Arctic.

The U.S. Air Force is preparing to fly F-35 stealth fighters in 50-degree below zero temperatures in preparation for Arctic warfare at the upcoming Red Flag exercise in Alaska.

The aircraft will participate in mock-combat operations in an area as large as 77,000 square miles as part of a massive cold weather war game.

“We take pride in knowing that not only can we survive at 50 degrees below zero, but we can launch jets in those conditions too,” Colonel Shawn Anger, 354th Fighter Wing Commander, said in an Air Force report.

Interestingly, the F-35 has already been gone through rigorous climatic testing to ensure it can operate in the harshest of conditions, including the ability to fly missions at 40-degrees below zero Fahrenheit. The cold weather testing, conducted during an earlier phase of the F-35s development, was part of an overall integrated effort to assess the jet in a range of conditions including high winds, solar radiation, humidity, rain, ice buildup and vortex icing and snow.

During the testing, the aircraft is basically flying in place, meaning it is tethered down but fully powered up, allowing testers to simulate meteorological conditions with an operational aircraft, Pentagon F-35 officials explained.

Pilots are outfitted with a thermal layer of underwear and an additional thermal layer over that—followed by a light suit and snowsuit conduct the tests in extremely cold temperatures; they also wore winter weight socks, arctic boots and winter flying gloves.

Cold weather combat is taking on greater urgency as global competition for influence, power and presence increases in the Arctic. Weapons systems such as the F-35s 25mm gun or EO-IR cameras could easily be disabled by ice or freezing temperatures. Warming systems such as aircraft electronics or engine heat could help defrost areas of the fuselage and related sensor systems, yet at the same time, large differences in temperature between the aircraft and surrounding air can increase radar signature and possibly decrease stealth effectiveness. Thermal sensors and heat-seeking missiles, as well, are more likely to succeed in hitting their targets should the aircraft’s warmth greatly distinguish it from outside temperatures.

Also, extreme snowstorms, clouds or other kinds of weather obscurants could impede targeting systems and cameras, underscoring the importance of all-weather sensing technology.

When it comes to Arctic conditions, airpower itself takes on additional importance given that icy terrain may prove difficult for ground forces to operate in. Furthermore, more and more waterways are opening up due to the pace of melting ice, a circumstance that could radically change mobility conditions for advancing ground units which might suddenly come across impassable areas.

The difficulties confronting ground armies in the Arctic makes forward operating bases even more crucial in the areas as outposts, supply areas and possibly landing areas for aircraft. The changing conditions will also require advanced air-surface-undersea networking, given that new waterways and tactical nuances are likely to emerge. Extreme temperatures could make certain data links and electronic communications technologies somewhat challenging as well.