Are Aircraft Carriers Doomed in the Next Great Power Conflict? 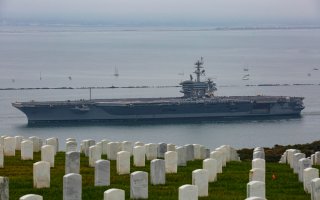 Here's What You Need to Know: Should the United States engage another great power in a full-on naval conflict, the winning side would likely be the one that could replace its missiles and ships more quickly.

There are, however, some naval experts who would push back against the Washington establishment’s pro-carrier sentiments. One such expert is Dr. TX Hammes, a retired Marine Corps colonel and a Distinguished Research Fellow at the National Defense University’s Institute for National Strategic Studies. The Center for the National Interest hosted Hammes for a private breakfast event on Wednesday, June 5, 2019 during which he outlined his innovative, if not controversial, proposal to shift the focus of the U.S. Navy from its aircraft carriers to a large armada of missile-armed merchant ships which are better equipped to handle the challenges of modern naval warfare.

Matt Reisener is the Chief of Staff at the Center for the National Interest.