Are U.S. Marines Actually in Taiwan? 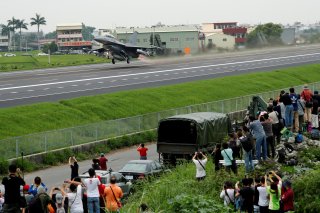 Here's What You Need To Remember: This is the first time that the presence of U.S. troops has been openly reported by Taiwanese newspapers - and could mark a worrying escalation between the United States and China.

In a recent flurry of media activity, members of the U.S. Marine Corps’ storied Marine Raider Regiment were said to be on the island of Taiwan, training alongside Taiwanese Marines. Taiwanese media cited Taiwan’s Naval Command, stating that a “contingent” of Marine Raiders would train Taiwanese troops for a period of about a month, and would include “assault boat and speedboat infiltration operations” at the Tsoying Naval Base in Kaohsiung in Taiwan’s southwest.

The Regiment’s mission is to offer “tailored military combat-skills training and advisor support for identified foreign forces in order to enhance their tactical capabilities…train, advise, and assist friendly host nation forces - including naval and maritime military and paramilitary forces - to enable them to support their governments’ internal security and stability, to counter subversion and to reduce the risk of violence from internal and external threats.”

In relations to Taiwan’s precarious geographic situation close to China, the external threats risk reduction mission would be of particular value to Taipei.

The Marine Raider byline was widely picked up, with multiple websites citing the Taiwanese media’s coverage. If true, it would mark the first time since the 1970s that Marines have been confirmed training in Taiwan alongside Taiwanese forces. But is it true?

If true, the Marine Raiders wouldn’t be the only Americans training alongside Taiwanese soldiers—though they would be among the most capable. A capable Marine Corps presence in Beijing’s backyard would also make sense, considering the recent Marine Corps revamp of both equipment and tactics. America’s force-in-readiness is upping the ante—Beijing beware.

Caleb Larson is a defense writer with the National Interest. He holds a Master of Public Policy and covers U.S. and Russian security, European defense issues, and German politics and culture. This article first appeared last month.