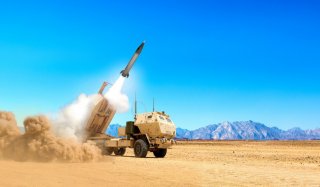 Here's What You Need To Remember: New guidance systems enabling moving-target strikes could bring additional attack options to ground commanders operating in an increasingly multi-domain environment. Land weapons are increasingly being thought of as being able to attack ocean targets and vice-versa as Pentagon war-planners seek to refine joint-attack possibilities and anticipate the complex combat environment expected to characterize modern warfare.

The Army’s new Precision Strike Missile may be getting even more precise and reliable due to targeting upgrades now being explored by Army weapons developers, a tactical strategy intended to out-range potential adversaries and destroy a wider range of targets from distances as far as 500km.

“Seeker integration is something we need and we are endeavoring to do as we move forward,” General Joseph Martin, Vice Chief of Staff of the Army, told an audience while speaking at a think tank called The Foundation for the Defense of Democracies.

The weapon, called the PsM, now draws upon GPS and inertial measurement unit technology. However, it would certainly not be surprising if the Army were looking at both hardening its guidance networks and also exploring non-GPS, less-jammable targeting technologies.

While Martin did not elaborate on any specifics or particular plans related to a new seeker, he did talk about the fast-growing importance of the weapon. He explained how it will bring much longer range and increased precision compared with the missile it is replacing, the Army Tactical Missile System.

“The current missiles can go about 350km and this will go beyond 500km eventually. We are almost doubling the range with existing launchers so we are not having to invest in new launchers. We can now put two missiles in the launcher as opposed to what we can do now which is one,” General John Murray, Commander, Army Futures Command, told TNI in an interview earlier this year.

The PsM, according to Murray, represents a specific effort to move beyond previous range restrictions, given that the Intermediate-Range Nuclear Forces Treaty (INF Treaty) was canceled due to Russian violations. A weapon of roughly 500km does bring a mid-range attack possibility of particular relevance in places like the European continent which is home to many U.S.-allied countries. The Army’s new land missile able to travel those distances is, quite simply, intended to “out range” the enemy, as Army weapons developers explain it. An ability to hold an approaching force at risk, while being at lower risk of an enemy strike of counterattack, is the strategic intent for the missile.

Additional seeker sophistication could also better enable the missile to maneuver in flight to potentially change targets or, when needed, destroy moving targets. Many medium-to-long range missiles, such as the Army’s Guided Multiple Launch Rocket System, fire from fixed-point to fixed-point.

However, emerging technologies are now changing this equation and bringing new dimensions of maneuverability to these kinds of weapons. Such adaptations are already being made with cruise-missiles such as the ship-and-submarine-fired Tomahawk missile.

The Tomahawk not only has a massive reach of 900 nautical miles, but a new Maritime variant uses improved radio throughput, software upgrades and advanced seeker technologies to both change trajectory in flight and destroy moving targets such as enemy ships or land convoys.

Interestingly, Martin said that the Army was now developing a land-fired Tomahawk variant, a weapon which would also fall into the post-INF category. Existing Block IV Tomahawks already use a two-way data link to identify targets and operate with a “loiter” ability to hit targets as they become available. New guidance systems enabling moving-target strikes could bring additional attack options to ground commanders operating in an increasingly multi-domain environment. Land weapons are increasingly being thought of as being able to attack ocean targets and vice-versa as Pentagon war-planners seek to refine joint-attack possibilities and anticipate the complex combat environment expected to characterize modern warfare.

While the PsM would, quite naturally, be useful in full-scale mechanized force-on-force combat, they also proved worthwhile in counterinsurgency attacks as Taliban and Iraqi insurgents deliberately blended in with innocent civilians among local populations. As a result, precision attacks became necessary, even vital, to U.S. combat success. Such a phenomenon is equally applicable to major warfare scenarios, given the increase in global urbanization and the need for armored forces to advance through and occupy cities. Therefore, something that is both longer range, and precision-guided, brings commanders newer, more advanced attack options.