The B-2 Bomber Is Still Delivers a Killer Performance 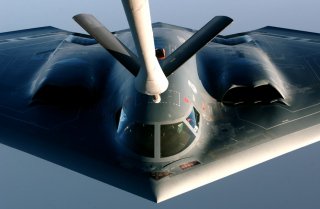 Here’s What You Need to Remember: The USAF plans to modernize the B-2 platform over the coming decades while retaining the core performance features that have made it America’s staple heavy nuclear bomber. The ongoing B-2 modernization program is focused around a deep avionics overhaul, integrating a new flight management control processor and “Defense Management System (DMS),” a collection of sensors calibrated to reveal the precise location of enemy anti-air systems.

A few years back, the US Air Force posted a two-minute long video of the B-2 dropping GBU-57A/B “bunker buster” bombs from a past training event. The clip, shot with an unusually high video fidelity for a military exercise, shows a B-2 opening its internal weapons bay to drop two GBU-57 massive ordnance penetrator (MOP) bombs. One of the bombs drills into the earth beneath the designated area, marked with a red cone, before detonating in a powerful explosion with good effect on target (GEOT).