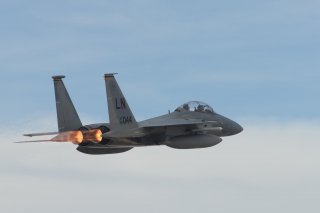 Key Point: The F-15EX will be easier to build, put into service, and maintain than an equal number of F-35s.

In a notice on the U.S. government contract award website, beta.sam.gov, the U.S. Air Force announced they had awarded a sole source contract to Boeing. “The United States Air Force Life Cycle Management Center intends to award a sole source indefinite delivery/indefinite quantity (ID/IQ) contract to The Boeing Company for a refresh to the F-15C/D fleet and augment the F-15E fleet.”

The refresher airframe? The F-15EX. “The intent is to procure upgraded F-15EX aircraft, as well as any future modernization and sustainment efforts. Contract requirements include aircraft, modernization efforts such as hardware and software design, development integration, test, subsystem and structural component production, installation of future modernization kits, and enhancements to the F-15E weapon system as well as product support.”

But why? The F-15 platform first flew in the mid-1980s, making it close to 40 years old. How—and why—could this old bird be used to refresh Air Force inventories?

Despite the slow but steady roll-out of the much more advanced F-35 Lightning II platform, somewhat aged F-15s continue to augment existing Air Force inventories. The platform the F-15EX will be replacing—F-15Cs—are really old. Moreover, according to the Air Force the F-15Cs are still flying despite missing their scheduled retirement date. These old F-15Cs now have to operate “under significant speed and G-loading restrictions,” a move that significantly hinders their capabilities.

The current high flight hours of the F-15 fleet is due in part to the unexpected early termination of F-22 Raptor production lines. Instead of the many hundreds of F-22s the Air Force anticipated buying, a mere 187 airframes were introduced into service, shifting more flight hours to F-15s. Thankfully they’re easier to manufacture than many other airframes currently in United States service.

The F-15EX will be easier to build, put into service, and maintain than an equal number of F-35s. The Air Force estimates F-15EX’s share 70% of parts with F-15Cs and F-15Es that they will be replacing. Not only are production lines still in place, but the training facilities, maintenance depots, and other infrastructure can be easily shifted to F-15EX support from other F-15 variants.

But, not everyone is in agreement with the plan to acquire more F-15s. The move has been criticized by some of the Air Force’ top brass, who took issue with the F-15’s survivability on modern battlefields, despite the additional capabilities of the latest F-15EX standard.

The F-15EX does not have the stealth characteristics inherent to the newer F-35 and F-22 airframes and are internally estimated by the Air Force to be able to operate in hostile airspace only until 2028. In an interview, a retired Air Force general questioned the move to buy F-15EXs, saying, “Do we put our young officers in an airplane that we know, before we even buy them, that they’re not as survivable?”

For now it seems, the answer is yes.