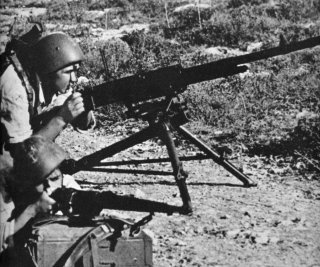 Here’s What You Need to Remember: Whereas most nations had developed machine guns that could be moved forward in an attack—such as the British Bren Gun or Germany’s general-purpose MG34, the Breda 37 was utilized with a heavy tripod that made it among the heaviest light machine guns employed during World War II.

During World War II the Royal Italian Army was noted for not having the best logistics, and it lacked a standardization of ammunition—something that became a serious problem in keeping troops supplied. During the war, the RIA fielded nearly a dozen different machine guns in four different calibers.

In the case of the Mitragliatrice Breda calibro 8 modello 37—commonly known simply as the Breda 37—it utilized a heavy cartridge that was developed only for use in Italy’s machine guns. The 8x59mmRB Breda was also unique in that it was one of a very small number of cartridges designed with a rebated rim, where the rim is smaller than the diameter of the body. This meant the machine gun crews had to have unique supplies of ammunition—whereas most nations of the era utilized the same rounds for the main battle rifles and machine guns.

The advantage for the Italian units equipped with the Breda 37 was that they had a relatively powerful weapon that offered a range of up to fifty-two hundred meters and effective to about one thousand meters. However, the machine gun was antiquated by the time it was introduced in 1937. Whereas most nations had developed machine guns that could be moved forward in an attack—such as the British Bren Gun or Germany’s general-purpose MG34, the Breda 37 was utilized with a heavy tripod that made it among the heaviest light machine guns employed during World War II.

Also, unlike the MG34, American Browning M1919 or even the British World War I Vickers, which were fed from ammunition belts, the Breda 37 was fed by twenty-round trays of cartridges similar to those employed on the French Hotchkiss machine guns that were introduced prior to World War I.

That limited the continuous rate of fire as a second crew member had to feed in the trays. Worse was the fact as the trays were loaded with the rounds underneath, and if one round fell out the gunner had to recharge the weapon. Unlike the Hotchkiss the empty cartridges remained in the tray, which slowed the reloading in the field, but this was actually done on purpose. The reason was to ensure that the empty brass cartridges could be returned to the depot for reloading. Of course, it failed to take into account that in the heat of battle the last thing a gunner and crew would have been concerned with is returning spent cartridges!

One inadvertent “advantage” of utilizing the cartridge trays was that it slowed the rate of fire, which allowed the gun to have a moment to cool as the high caliber rounds could cause the gas-operated Breda 37 to overheat quite quickly. The barrel was also designed for a quick swap out, but in the field, few gun crews were actually issued a spare anyway!

With a trained crew in ideal conditions, the machine gun was capable of sustained fire of around 460 rounds per minute, but in practice, it was really about two-hundred rounds—far slower than nearly all of the contemporary machine guns of the era. Additionally, even the slightest of dirt or grime could cause a jam, which was cumbersome to clear. The Breda was mainly deployed to the RIA in North Africa, where the sandy, desert environment did little to help with its reliability.

One common misconception is that the Breda 37 required that each cartridge be oiled before being fed into the chamber, but this is incorrect. It is likely that some gun historians have confused the Breda 30 light machine gun, which did require that rounds were oiled, with its heavy cousin.

A final peculiarity of the Breda 37 was that it could be employed as an anti-aircraft machine gun, and the Italian designers provided components that allowed the infantry tripod to “transform” for that role. However, it was carried in a separate transit box and added multiple pieces. If any of the components were misplaced or even slightly bent out of shape, then the anti-aircraft mount wouldn’t work. Even in the most ideal setting, the anti-aircraft stand was poorly balanced and unless on completely flat ground the mount and gun would tip over!

Italy was not the sole user of the Breda 37. A number were exported to Portugal as the “Metralhadora pesada 7,92-millimeter m/938 Breda”—where it was chambered for the 7.92x57millimeter Mauser rifle cartridge. It was used in various Portuguese colonial wars until the 1960s. There are also sources that suggest Spain also adopted the 7.92x57-millimeter version in small numbers as well.