Can the Pentagon Develop an Asymmetric Defense of Taiwan? 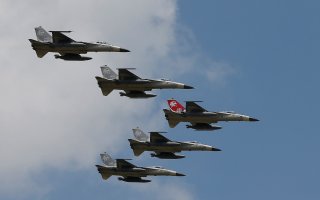 Here's What You Need to Know: A decisive, permanent U.S. military victory over China is difficult to envision.

In recent months, as China’s threats against Taiwan have mounted, strategists and policymakers have been debating whether it is time for a change to the somewhat tortured method by which the United States has sought to preserve stability across the Taiwan Strait since the late 1970s. The current policy of “strategic ambiguity” seeks to keep everyone guessing as to whether America would militarily counter a Chinese attack on its much smaller neighbor. Washington’s specific response would depend on how a crisis began and unfolded. That is because America has had multiple, sometimes conflicting goals—to deter China from attack, to preserve good U.S.-China relations, and to discourage pro-independence forces within Taiwan all at once. Some now favor discarding this elaborate balancing act in favor of an unambiguous commitment to Taiwan’s security.

There is just one problem with this way of thinking. A promise by America to defend Taiwan does not mean that it could defend it. That is especially the case if one considers a protracted Chinese blockade of the island, and imagines that the United States would try to break the blockade directly. Such an attack would employ China’s quiet submarine fleet and perhaps some use of precision missiles. The goal would likely be to strangle Taiwan into capitulation, as Germany almost did twice against Britain in the world wars. Taiwan has just increased its military budget 10 percent, to about $15 billion a year, but it is dwarfed by China’s total, which is more than fifteen times as great. At that level of investment, Taiwan may be able to fend off an outright Chinese invasion attempt with a “porcupine” defense featuring sea mines, anti-ship missiles launched from shore batteries and helicopters, and concentrated resistance wherever China tries to come ashore. But it would likely fare less well against a more indirect Chinese strategy.

American advantages in fifth-generation combat aircraft and modern attack submarines would give the United States and its partners in the operation a significant edge in a campaign designed to break the blockade. However, China would clearly have the edge in geography; crucially, it also now possesses a fleet of very good attack submarines and a large inventory of precision-strike missiles too.

The essence of the problem is that America cannot reliably find Chinese attack submarines before they get off one or more shots at ships, including possibly U.S. aircraft carriers, in the region. Worse, if they use long-range missiles against U.S. ships, then it may not be possible to find the submarines after such attacks. The only truly reliable way to counter the threat would be to attack the submarines in port when they refuel and rearm. In other words: the United States would need to attack the Chinese mainland, with all the enormous risks of escalation that could portend.

The challenge is similar in regard to China’s inventory of more than one thousand precision-strike missiles. They can be fired from many locations in southeastern mainland China against airfields, ports, and other infrastructure on Taiwan—and against ships at sea. U.S. missile defenses might be able to neutralize some. But in a saturation attack, and given the state of the offense-defense balance in regard to such missiles, many would surely get through. Again, America’s likely recourse would be to search for and attack the missile launchers on mainland Chinese soil.

Meanwhile, both sides would have strong incentives to take down or jam each other’s satellites, hack command and control systems, cut fiber-optic communications cables, and otherwise seek to create mayhem in order to blind and cripple the adversary. It is distinctly possible the United States could lose thousands of sailors and other personnel in the course of such a conflict. That is why defense strategist and former John McCain aide Chris Brose reports that in Pentagon wargames over Taiwan, China often defeats us. Even if China started to lose such a war, given how strongly it feels about Taiwan, it would have powerful incentives to introduce the use of tactical nuclear weapons into the equation, targeting aircraft carrier battle groups and bases on Japan with these weapons.

Just where this foreboding path would end is hard to predict. Countries at war tend to do irrational or escalatory things when the tide of battle does not at first go their way and when they consider their survival as a nation to be at stake. Losing Taiwan would go far towards invalidating the legitimacy of communist rule in China, as its leaders surely know. They would be extremely reluctant to accept defeat in this kind of war.

There must be a better way. Strategist Bridge Colby has recently sketched out part of the right strategy with his call for a massive U.S. airlift effort to keep Taiwan afloat in the course of any such boa constrictor strategy by the People’s Republic of China, modeled after the Berlin airlift of Cold War times. But also, America needs a better offensive campaign plan. The most promising strategy would center on all-out economic warfare against China. The United States should cut off all trade with China at the outset of any such war, and pressure U.S. allies to do the same. That strategy necessitates numerous preparatory measures now to increase America’s collective resilience to such a scenario.

In addition, unless the crisis is quickly resolved, the United States should consider using its military superiority in the Indian Ocean and the Persian Gulf regions to go after China’s economic lifelines there, attacking shipping that is likely headed to Chinese destinations using U.S. attack submarines, long-range bombers, and other stealth aircraft based throughout the region. China gets half or more of its energy from the broader Persian Gulf and African theaters, so its vulnerability here is great. And because the crews of most modern ships number in the dozens, the human stakes here while serious are far less than in war that could quickly involve Chinese and Japanese territory. (Indeed, America should try to develop improved nonlethal ordnance to incapacitate ships without sinking them.) Even after these military attacks begin, the goal of course should remain a negotiated outcome. It is not credible to envision with any confidence a decisive, permanent military victory in any U.S.-China war—unless the two countries collectively wind up in Armageddon.

And yes, the United States can realistically commit to this kind of strategy now. That will especially be the case if it continues to reduce its collective western dependencies on key Chinese exports, like rare Earths, by stockpiling supplies and developing alternative sources. America and its allies are overdue in making such efforts. Thankfully, there is reason to think that U.S. collective insouciance is starting to end on the economic side of the ledger. Now, the Pentagon, along with the U.S. Treasury Department and the rest of the government, need to take advantage of this situation and develop a better integrated, asymmetric strategy for protecting Taiwan.

Michael O’Hanlon is the author of The Art of War in an Age of Peace: U.S. Grand Strategy and Resolute Restraint and Senior Fellow at the Brookings Institute.