Can Russia’s MiG-31 Fighter Intercept Intruders in the Stratosphere? 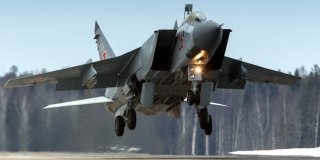 Here’s What You Need to Remember: From its inception in the early 1980’s through to the present day, the MiG-31 has been the fastest aircraft to serve in the formerly Soviet and now Russian Air Force. Its speed makes it especially well-suited as a home-defense interceptor, capable of zipping through Russia’s vast airspace to locate and engage intruders as quickly as possible.