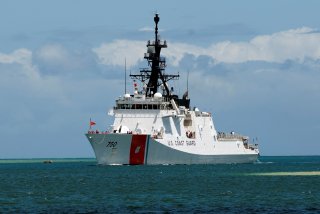 Here's What You Need to Know: The United States needs an integrated, all-domain naval force that can protect U.S. interests in peacetime, deter conflicts if possible and defeat threats from China and others if necessary.

The three sea services—the Navy, Marine Corps and Coast Guard—just released their new, joint maritime strategy titled Advantage at Sea: Prevailing with Integrated All-Domain Naval Power. The document reflects the realities of an international environment dominated by great-power competition, most of which is conducted below the threshold of overt conflict. The strategy stresses the importance of peacetime operations and crisis responses to U.S. economic, political, and national security interests. Today’s new challenges demand an expanded role for the Coast Guard.

The U.S. government has identified China as the main competitor, what is often termed the “pacing threat.” But Russia, too, and even lesser players such as North Korea are seeking to undermine the security of the maritime domain. The Maritime Strategy declared that “China’s and Russia’s revisionist approaches in the maritime environment threaten U.S. interests, undermine alliances and partnerships, and degrade the free and open international order,” the document states. “Moreover, China’s and Russia’s aggressive naval growth and modernization are eroding U.S. military advantages. Unchecked, these trends will leave the Naval Service unprepared to ensure our advantage at sea and protect national interests within the next decade.”

China’s ambitions to dominate the Indo-Pacific region is undeniable. It is also clear that Beijing is using its massive fishing fleets and Coast Guard to extend the regime’s power in the area. This simultaneously undermines long-established tenets of international law and threatens U.S. friends and allies.

The United States needs an integrated, all-domain naval force that can protect U.S. interests in peacetime, deter conflicts if possible and defeat threats from China and others if necessary. The force must be capable of meeting lesser threats as well as dealing with a host of challenges from piracy to overfishing, human trafficking, drug smuggling and environmental crimes.

The Tri-Service Strategy declares that “We must operate more assertively to prevail in day-to-day competition as we uphold the rules-based order and deter our competitors from pursuing armed aggression.”

The Coast Guard is uniquely qualified to operate in an environment where competition is constant and occurs across multiple domains and missions. Also, due to its special status as both a law enforcement organization and military branch, the Coast Guard can impact the maritime environment in ways that traditional military forces cannot.

But to do so, it needs modernized capabilities. Current plans envision new generations of ships aircraft and unmanned vehicles. These programs are vital both to the future of the Coast Guard and to the implementation of the new strategy.

Across the world’s oceans and seas, particularly the vast expanse of the Pacific Ocean, the Coast Guard capability that most stands out is provided by the new Legend-class National Security Cutters (NSC). These ships are the foundational capability for Coast Guard operations, particularly in the Indo-Pacific region.

The Legend-class ships are better in almost all ways to the aging Hamilton-class High Endurance Cutters they are replacing. The NSCs have better seakeeping abilities, sustained transit speeds and range, all-important features for the Indo-Pacific region. Advanced sensors and the Sea Commander combat system allow for close integration with Navy and Air Force units. In addition, the new NSCs can deploy small boats and their aviation infrastructure supports the operation of helicopters and unmanned aerial systems (UAS). All of the Legend-class vessels are being equipped with an advanced version of the Scan Eagle UAS which will significantly expand the area they can surveil.

In many situations, the Coast Guard is the preferred tool for missions in the Indo-Pacific region. After all, the new NSCs are uniquely suited to the demands of operations across the conflict spectrum in the Pacific region.

“Each NSC is capable of operating in the most demanding open ocean environments, including the hazardous fisheries of the North Pacific and the vast approaches of the Southern Pacific where much of the American narcotics traffic occurs,” according to the Coast Guard. “With robust command, control, communication, computers, intelligence, surveillance and reconnaissance equipment, stern boat launch and aviation facilities, as well as long-endurance station keeping, the NSCs are afloat operational-level headquarters for complex law enforcement and national security missions involving multiple Coast Guard and partner agency participation.”

A recent patrol by the U.S. Coast Guard Cutter Bertholf exemplifies the breadth of the missions undertaken by the Coast Guard and the unique value provided by the Legend-class NSCs. Operating with Task Force 70 of the 7th Fleet in the Western Pacific, the Bertholf conducted sanctions enforcement and freedom of navigation operations, worked cooperatively with allied naval forces, protected international fisheries and went eyeball-to-eyeball with the Chinese Navy and Coast Guard.

The Coast Guard’s need for Legend-class NSCs is only going to increase in light of the Coast Guard’s growing role in the joint maritime strategy and America’s need to counter China’s aggressive and predatory behaviors, protect U.S. economic interests and the maritime environment, interdict drug smugglers and reassure friends and allies. Despite these threats, the Coast Guard has chosen not to fund a twelfth NSC, despite Congress having provided long-lead funding for this ship.

While the Coast Guard is struggling to ensure adequate readiness and simultaneously modernize its entire portfolio of ships and aircraft, not proceeding with a twelfth NSC is a shortsighted decision. In view of the intensifying competition with China and other hostile states, as well as the rampant overfishing and smuggling in the Pacific, the Coast Guard will likely need more than twelve NSCs.

This article first appeared earlier and is being republished due to reader interests.