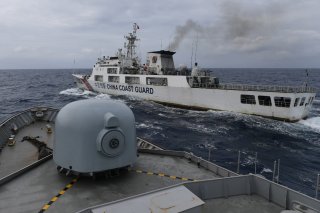 Here's What You Need to Remember: The draft law’s rules of engagement are just the latest transition of the China Coast Guard into a true quasi-military force—and one under the PAP, which answers directly to the Chinese Communist Party’s Central Military Commission.

Despite being one of the newest—and certainly lesser known—branches of the Central Military Commission, the Chinese People’s Armed Forces Coast Guard Corps (CPAFCGC) is also the world’s largest coast guard and has increasingly been taking on a role of a naval force. This month the Chinese Communist Party released a draft law that would empower the Chinese Coast Guard to use actual “military force” against foreign vessels, and that could potentially be applied in disputes in the South China Sea.

Under this new law China will allow its coast guard personnel to use weapons when foreign vessels are involved in illegal activities in waters under Beijing’s jurisdiction. The draft details, which were first revealed by the National People’s Congress on Wednesday, maintain that the coast guard has the authority to also forcibly drive away foreign vessels that intrude into Chinese territorial waters or even to interrogate their crews.