China’s Comanche: The Z-19 ‘Black Whirlwind’ Helicopter Has a Problem 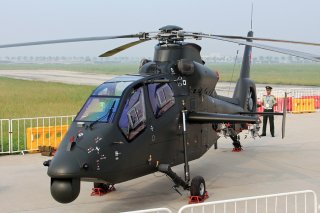 Here's What You Need to Remember: Though a Z-19 prototype was lost in an accident in 2010, Wu’s new design was unveiled to the public just two years later and soon entered limited PLA service.

To fulfill its scout-role, the Z-19 has a sensor turret in its nose combining an electro-optical/infrared system, a laser-targeter/rangefinder, and day/night TV cameras which make it night- and all-weather- capable. Later, some Z-19s have been equipped with millimeter-wavelength electronically scanned array radar domes mounted on top of the four-bladed main rotor, much like the radar on the AH-64D Apache Longbow. A Z-19 so equipped can potentially duck behind terrain while its radar scans the area.

Intriguingly, the Z-19 seems to share a few stealth features in common with the Comanche. It’s fenestron tail rotor is designed to dampen noise, and its engine exhausts are designed to channel heat in such a way to reduce infrared signature. This could help it survive as most short-range anti-aircraft weapons like the man-portable Stinger missile or even vehicle-mounted SA-9 or SA-13 systems rely on infrared guidance. The chopper also has its own self-defense electronic warfare suite and an infrared countermeasure system.