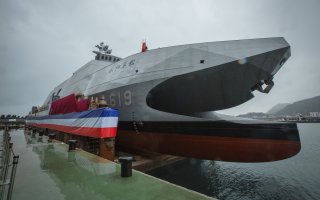 Here's What You Need to Know: Taiwan is expected to receive a total of eleven of the stealthy carrier killer corvettes over the next five years.

This year China sent a loud and clear message to the U.S. Navy when the People’s Liberation Army Navy (PLAN) conducted several tests of its new “aircraft carrier killer” missiles. However, Beijing may have received a similar, and notably as clear message from Taipei this month after the Taiwanese Navy announced that it has launched the first of its heavily armed “carrier killer” corvettes.

The domestically-produced vessels have been touted as a key component to the independent island nation’s defense efforts against its mainland neighbor. The corvettes, which have earned the nickname “aircraft carrier killers,” are armed with subsonic and supersonic missiles.

By comparison, the Coast Guard Administration’s Anping-class offshore patrol vessels, which are meant for law enforcement purposes, are lightly armed. Its weapons include a 20mm cannon, high explosive rockets and a water cannon. However, these vessels can be upgraded to carry the HF-2 and HF-3 missile systems in a time of war. Exactly how quickly such a conversion might take isn’t known, but as the two classes of vessels are similar, the Coast Guard ships could be equipped quickly and ready for action.

Both ships were built by the Kaohsiung-based Jong Shyn Shipbuilding Group, and feature a modern catamaran design. This can provide better stability, maneuverability, less draft, greater speed and superior fuel efficiency. The Tuo Chiang-class corvettes have a length of 60.4 meters, displacement of 685 tons, a maximum operational range of 1,800 miles, and a top speed of 43 knots, according to Lungteh Shipbuilding. The first of the class is expected to be officially delivered to the Taiwanese Navy next July.

Taiwan is also expected to receive a total of eleven of the stealthy carrier killer corvettes over the next five years, with plans for the Taiwanese Navy to receive six by 2023 and five more by 2025. The question is whether Beijing will see the corvettes as an actual threat.