China Is Building Out Its Fleet of Ballistic Missile Subs 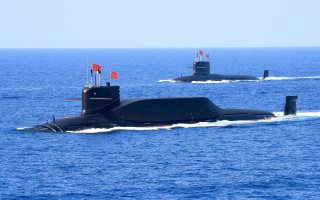 Here's What You Need to Remember: China's newer Type 094 class of SSBNs, each armed with a dozen, longer-range JL-2 nuclear-tipped missiles, began to enter service around 2006.

China for decades has struggled to develop nuclear ballistic-missile submarines. The country finally might be on the cusp of deploying reliable boomers.

An effective Chinese ballistic-missile submarine fleet over the long term could have a stabilizing influence on the world's nuclear balance. But in the short term, it might heighten tensions. Especially if Beijing lets popular fervor drive its build-up.

That’s the surprising conclusion of a new report from Tong Zhao, a fellow in the Nuclear Policy Program at the Carnegie Endowment for International Peace, based at the Carnegie–Tsinghua Center for Global Policy in Beijing.

“A fleet of survivable nuclear ballistic missile submarines (SSBNs) would reduce China’s concerns about the credibility of its nuclear deterrent and lessen the country’s incentives to further expand its arsenal,” Tong writes.

“Such benefits, however, will be tempered by vulnerabilities associated with Beijing’s current generation of SSBNs. In the near to mid-term, developing an SSBN fleet will require China to substantially enlarge its previously small stockpile of strategic ballistic missiles, possibly exacerbating the threat perceptions of potential adversaries and causing them to take countermeasures that might eventually intensify an emerging arms competition.”

Beijing began developing boomers as far back as 1958. It wasn't until the late 1980s that the country completed its first boat. But the Type 092 SSBN never deployed on an operational patrol. “It was reportedly too noisy and might have had other safety and reliability issues,” Tong explains. “Moreover, the missiles it carried had very short ranges.”

The newer Type 094 class of SSBNs, each armed with a dozen, longer-range JL-2 nuclear-tipped missiles, began to enter service around 2006. A Type 094 apparently conducted China's first undersea deterrence patrol in 2015. “China has obtained, for the first time, a demonstrably operational underwater nuclear capability. This represents the start of a new era for China’s sea-based nuclear forces.”

As of late 2018 there are four Type 094s in service. Beijing has not publicly released a detailed plan for its SSBN fleet expansion, but the U.S. military expects China to build between five and eight of the vessels, in total, according to Tong and various military reports and statements.

The U.S. military has responded to the China's new boomers by boosting its own anti-submarine capabilities. “Between Chinese efforts to create a credible sea-based nuclear deterrent and U.S. endeavors to strengthen anti-submarine countermeasures, tensions are brewing under the surface of the South China Sea and the broader Pacific Ocean,” Tong explains.

But the Type 094s and future Chinese SSBNs could actually end up encouraging stability rather than conflict. Today SL-2s about boomers account for nearly half of China’s approximately one-hundred-strong arsenal of long-range nuclear missiles. That proportion is likely to rise as more SSBNs enter service.

As they have the potential to be more survivable than land- and air-launched nukes, the SL-2s could change the attitudes of Chinese leaders toward the country's atomic deterrent. “If China’s SSBNs significantly contribute to the credibility of its overall nuclear deterrent, China would have less of an incentive to further enlarge its nuclear arsenal,” Tong writes.

In other words, China ultimately might need fewer nukes overall if a larger proportion of the weapons are submarine-launched missiles. In an era of escalating nuclear buildups in the United States and China, a relatively smaller and stabler Chinese arsenal could have a cooling effect, according to Tong.

But Beijing must convince other powers that a growing boomer fleet contributes not only to its own national security, but to the stability of the whole world. “China has a few unilateral steps that it should take to ensure that the growth of its SSBN fleet is as undisruptive as possible to regional security dynamics and to its own security interests.”

For one, China must build only as many SSBNs as it truly needs in order to maintain a credible at-sea deterrence. Four or five Type 094s could be enough for one boat to be on patrol at all times. If Beijing builds significantly more than five SSBNs, it could mean that the Communist Party has let irrational nationalistic sentiment shape its force structure, as the Party allegedly has done in its breakneck acquisition of aircraft carriers.

“If China allows nationalistic sentiments to induce it to build a massive sea-based nuclear capability beyond any practical security needs, this could raise doubts in foreign countries about Beijing’s strategic intentions and contribute to an unnecessary, damaging strategic arms competition,” Tong warns.

But for China’s rivals, a small but reliable Chinese boomer fleet could be as calming as a big one is alarming.

David Axe edits War Is Boring . He is the author of the new graphic novels MACHETE SQUAD and THE STAN. This piece originally appeared in October 2018 and is being republished due to reader interest.