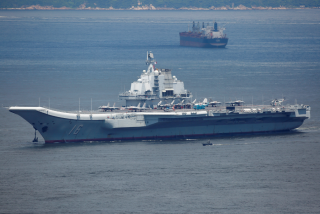 Here's What You Need To Remember: Earlier this year, for the first time in history, the PLAN was able to operate two carriers together in simultaneous training missions, where it has been refining its attack tactics. This is a significant move forward for the PLAN as it could launch a third and reportedly much larger and much more high-tech carrier by the end of this year.

A video released by China state media on YouTube on October 27, 2020 highlights the progress that the People's Liberation Army Navy (PLAN) has made with its first domestically-produced aircraft carrier, the Type 002 Shandong. The video from CCTV China shows that after ten months of training the PLAN has continued to improve its tactics and training methods.

According to Navy Recognition the carrier has completed a series of training exercises that include testing the combat capabilities, naval aviation operations, damage control, and emergency response of the carrier.

The Shandong, which was launched in April 2017, is largely less capable than its U.S. Navy counterparts, but it has been seen as serving as a stepping stone for a more powerful PLAN carrier force, as well as a point of national prestige but also potentially a platform for expeditionary missions aboard. More importantly, unlike the Type 001 Liaoning, which was essentially a rebuilt carrier from the hull of an uncompleted Soviet aircraft-carrying cruiser Varyag, the Shangong was built completely in China.

While it is true however that the carrier was still based on the blueprints for the Varyag, which Beijing acquired when it purchased the Cold War era warship from the Ukraine, this had allowed Chinese naval architects to learn the ropes in carrier building. The vessel shares many of the same elements of the Soviet-design but China was able to tweak to suit their needs accordingly.

It retained the ski jump ramp for takeoff of aircraft, which has limited the type of aircraft that can operate on the carrier.

While the PLAN hasn't officially stated the crew complement, it is believed to be between 2,500 and 2,625 sailors – plus the additional airwing. Unlike U.S. Navy carriers, the Shandong employs the simpler "short take-off but arrested recovery" (STOBAR) launch and recovery system.

The warship is powered by conventional steam turbines with diesel generators for propulsion. The top speed is 31 knots.

According to Navy Recognition, the ship's armament three Type 1130 CIWS Close-In Weapon System, a seven-barreled 30 mm Gatling gun that have a range of up to 3 km, as well as three HQ-10, a short range surface-to-air missile designed by China Aerospace Science and Technology Corporation. Each HQ-10 missile has a length of around 2 m and a width of around 0.12 m. The missiles have a range of 9 km against subsonic targets and 6 km against supersonic targets, and a flight altitude as low as 1.5 meters.

More on the Way:

Earlier this year, for the first time in history, the PLAN was able to operate two carriers together in simultaneous training missions, where it has been refining its attack tactics. This is a significant move forward for the PLAN as it could launch a third and reportedly much larger and much more high-tech carrier by the end of this year.

This third carrier, identified as a Type 002 carrier, is reported to have a displacement of 80,000 tons, considerably larger than the 60,000-ton weight of China’s first two carriers.

It is the latest effort from China's aggressive naval modernization activities that also highlight the sheer speed of Beijing shipbuilding capabilities. The anticipated warship is expected not only to be larger but will likely operate with longer-range electromagnetic catapults similar to those in use with the U.S. Navy's Ford-class of carriers.

Peter Suciu is a Michigan-based writer who has contributed to more than four dozen magazines, newspapers and websites. He is the author of several books on military headgear including A Gallery of Military Headdress, which is available on Amazon.com. This article was originally published earlier this month.