China's Third Aircraft Carrier Could Launch by End of 2020 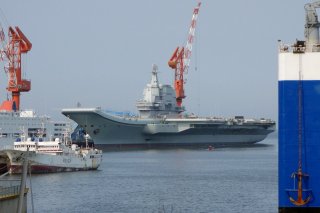 China may launch a larger, more high-tech third aircraft carrier as soon as the end of this year, a development further heightening concerns among Pentagon observers about China’s aggressive naval modernization activities and the sheer speed of Chinese shipbuilding.

The Chinese government-backed Global Times newspaper, citing a publication called Ordnance Industry Science Technology, states that photos taken in early September show that the “the general shape of the warship has taken form, with only the bulbous bow missing.”

Having already launched its second carrier, the Shangdong, the Chinese have for quite some time been working on the construction of this newer, far-more capable third aircraft carrier.

The third carrier, identified as a Type 002 carrier, is reported to have a displacement of 80,000 tons, considerably larger than the 60,000-ton weight of China’s first two carriers.

The Chinese paper reports that it will be able to operate a carrier air wing of more than 40 fixed-wing fighters. While conventionally powered, as opposed to the U.S. Navy’s nuclear-powered carriers, the Type 002 will greatly expand China’s air attack range and power-projection capability on a truly global scale. The Global Times reports that the new carrier will be about 320 meters long, surpassing the Shandong's 305 meters.

The pace of Chinese carrier construction clearly seems to represent the country's ambition to emerge as the world's leading military power in the ng decades and embrace an expeditionary posture for international operations.

China may arm its future carriers with its J-15 Flying Shark fighter and will likely add a carrier-launched variant of its 5th-Gen J-31 stealth fighter.

Interestingly, in a May 2020 Congressional Research Service Report, “China Naval Modernization: Implications for U.S. Navy Capabilities” it explains that fast-expanding Chinese Naval power may be a key reason why the U.S.Navy is now working on engineering greater numbers of unmanned vessels to conduct dispersed, or dis-aggregated missions less vulnerable to a massive frontal naval attack from China.

This not only allows larger manned vessels to remain at safer standoff distances but further enables armed attack, amphibious operations, and long-strike air support. Such a tactical approach, it seems, might easily be intended as a way to provide some strategic answers to the massive, growing international threat presented by the Chinese.