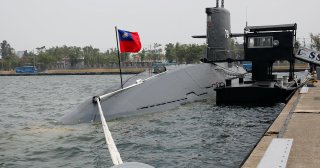 Here's What You Need to Remember: Modifications to the weapon improve the acoustic receiver, replaces the guidance-and-control hardware with updated technology, increases memory, and improves processor throughput to handle the expanded software demands required to improve torpedo performance against evolving threats, according to Navy information on the weapon.

The U.S. appears to be arming Taiwan with up to eighteen Mk48 Heavyweight torpedoes, extremely lethal submarine-fired undersea weapons built to destroy enemy surface ships, submarines, and other targets at sea.

The move, which was approved by the U.S. State Dept. this past spring, offers Taiwan vastly improved undersea defenses against a potential Chinese amphibious assault or maritime attack upon its shores. Unlike lighter-weight torpedoes that can be launched from a ship-deck or helicopter, the Mk 48 represents a precision-guided heavily explosive weapon fired from beneath the sea. It goes without saying that undersea superiority and attack possibilities would figure prominently in the Taiwan Strait during any Chinese invasion.

Having an ability to hold surface vessels, and amphibious operations in particular, at risk of torpedo attack, would of course greatly diminish the effectiveness of any kind of Chinese maritime assault. Mk 48s could, for example, seriously complicate any Chinese effort to move heavy armored vehicles, equipment and other assets ashore, as they could easily get destroyed in transit. The presence of these weapons might force invading Chinese forces to rely more heavily upon air attack and present less of a fast-moving ground threat involving heavy armored vehicles. This kind of dynamic might help offset Taiwan’s substantial Naval inferiority to China by virtue of forcing Chinese air attacks and the delivery of more lighter-weight weapons able to be air-dropped for ground attack.

In recent years, the U.S. Navy has been prototyping a new, longer range and more lethal Mk 48 that can better destroy enemy ships, submarines and incoming weapons at longer ranges, service officials said. Many details of the new weapon, which include newer propulsion mechanisms and multiple kinds of warheads, are secret and not publically available. Developers explained that some of the improvements to the torpedo relate to letting more water into the bottom of the torpedo as opposed to letting air out the top.

The earlier version, the Mk 48 Mod 6, has been operational since 1997—and the more recent Mod 7 has been in service since 2006. Lockheed has spent time in recent years working on upgrades to the Mk 48 torpedo Mod 6 and Mod 7—which consists of adjustments to the guidance control box, broadband sonar acoustic receiver and amplifier components. Modifications to the weapon improve the acoustic receiver, replaces the guidance-and-control hardware with updated technology, increases memory, and improves processor throughput to handle the expanded software demands required to improve torpedo performance against evolving threats, according to Navy information on the weapon. The Mod also provides a significant reduction in torpedo radiated-noise signatures, a Navy statement said.

Northrop contributes upgrades to the guidance control section of the Mk 48, which includes the integration of a system called Common Broadband Advanced Sonar System. The Northrop-built CBASS includes electronics to go into the nose of the weapon as part of the guidance section, Lockheed developers explained several years ago during an earlier phase of development for the weapon. Lockheed developers explain that the new technology involves adjustments to the electronic circuitry in order to make the acoustic signals that are received from the system that allows the torpedo to better operate in its undersea environment. Upgrades also consist of movement to what’s called an “Otto fuel propulsion system,” a lower-cost propellant intended as an alternative to electric propulsion, Lockheed data says.

Alongside Lockheed’s work to upgrade the guidance technology on the torpedo, the Navy is also preparing to build new Mk 48s. A Mk 48 torpedo is twenty-one inches in diameter and weighs 3,520 pounds; it can destroy targets at ranges out to five miles and travel at speeds greater than twenty-eight knots. The weapon can operate at depths greater than 1,200 feet and fires a 650-pound high-explosive warhead.