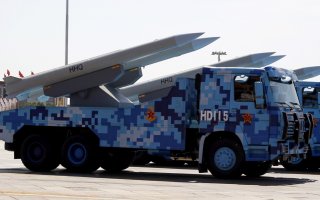 Here's What You Need to Remembers: "The Chinese have plans to at least double their arsenal by the end of the decade. They are departing from what has been known as a minimalist theory,” Gen. Timothy Ray, Commander, Air Force Global Strike Command, told reporters at the 2021 Air Force Association Symposium.

Ray’s concern about the fast-growing Chinese nuclear arsenal aligns with and builds upon the Pentagon’s 2020 China Military Report, which states that the number of warheads arming Beijing’s intercontinental ballistic missiles (ICBMs) capable of threatening America will likely grow to 200 in the next five years. As an element of this expansion, China is increasing its inventory of long-range land-fired DF-26 Anti-Ship missiles able to fire both conventional and nuclear missiles.

This article first appeared in March 2021 and is being reprinted for reader interest.