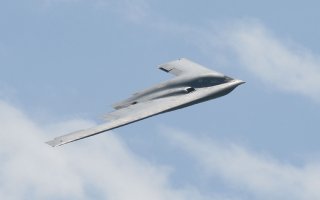 Here's What You Need to Know: The H-20 could be a gamechanger for Beijing.

While waiting for large numbers of its emerging H-20 bomber to arrive, China has been consistently upgrading its legacy Xian H-6 bomber to a degree that continues to generate U.S. concern.

The H-6, which can be traced as far back as to the Cold War era Tu-16 strategic heavy bomber, is mentioned thirty-three times in the Pentagon’s 2020 China Military Power report, according to a report from Flightglobal.

The report says the H-6 will likely fly into the 2030s, by virtue of an ongoing series of significant upgrades. Newer K, J, and N variants of the aircraft are powered by two more efficient Soloviev D-30 turbofan engines.

“With much larger engine inlets to accommodate the upgraded powerplant, the K, J and N variants dispense with the original glass nose of the Tu-16 and H-6, replacing it with a solid nose housing for a passive electronically scanned array or, potentially, an active electronically scanned array radar. It also has an electro-optical/infrared turret under the fuselage. The tail gunner’s station found on previous iterations makes way for a fully enclosed tail,” the Flightglobal report says.

Yet another variant is believed to be an electronic warfare aircraft.

Adding to U.S. concerns is China’s new H-20 bomber expected to fly alongside and ultimately replace the H-6. However, part of why the H-6 continues to be extended relates to the time it may take to produce and deploy the H-20 in sufficient numbers.

This kind of phased pattern does, to some extent, resemble the U.S. plans with the B-2 and B-21 bombers. The thirty-year old B-2 is expected to fly for many more years until sufficient numbers of the B-21 arrive. Therefore, in a manner not totally unlike China’s H-6 efforts, the B-2 continues to be upgraded with new weapons, sensors and computer technology to propel the aircraft into future years.

However, there may be substantial differences because, while the H-20 still remains mysterious to a large degree, it may not at all come close to rivaling the Air Force’s new B-21.

Quoting “military sources,” a report from The New Zealand Herald said the new and still somewhat mysterious H-20 bomber could make its first public appearance at this year’s Zhuhai Airshow in November—depending upon how things progress with the coronavirus pandemic.

The New Zealand report says the new supersonic stealth bomber could “double” China’s strike range. Interestingly, although much is still not known about the platform, its existence was cited in the Pentagon’s 2018 and 2019 annual “China Military Power Report.” The 2019 report specifies that the new H-20 will likely have a range of “at least 8,500km” and “employ both conventional and nuclear weaponry.”